I.Brattin wrote:Not sure when this will be on Drizzle as Dustin is on vacation. I know someone said Wolle add another age to Drizzle, but not sure if he will continue to do that or leave it till Dustin gets back.

The newest version of Chamassa is on the UAM now.

But I can't read every thread in every forum every day so feel free to PN me, when you have a new version.
The word "vegetarian" has an Indian origin and can be translated as: "the one who is too dumb to hunt".

Its been awhile since my last release. For awhile I had thought I had lost everything due to some problems with a virus. Luckily I was wrong.

Still I have made a few changes to it. Gone is the rock wall surrounding the islands. Now the islands sit inside a cove. The granary turned library (what is the library on island two) is now becoming simply a house. A new library is being added. I am not sure if the last release had Stonehenge or not. The next release will have a pyramid, if you have ever seen Palenque then you can imagine what it will look like.

Lastly a new journal will eventually be added, one detailing the story of Chamassa. A sneak peak at that story. The race that originally inhabited Chamassa were called the Ta`Yawha. The even named their world after themselves. Jayden (the IC Explorer that wrote the age) called it Chamassa, after a catastrophe befell the Ta`Yawha. In the Ta`Yawha language Chamassa means death. 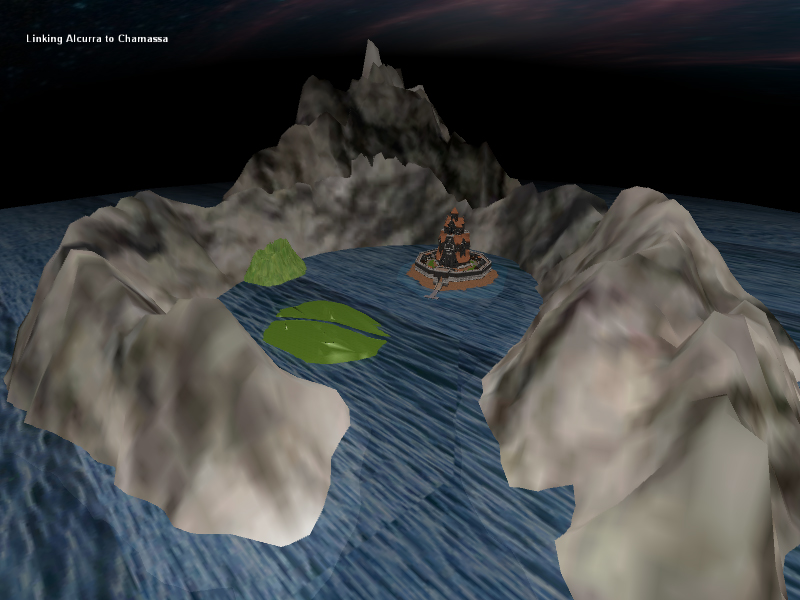 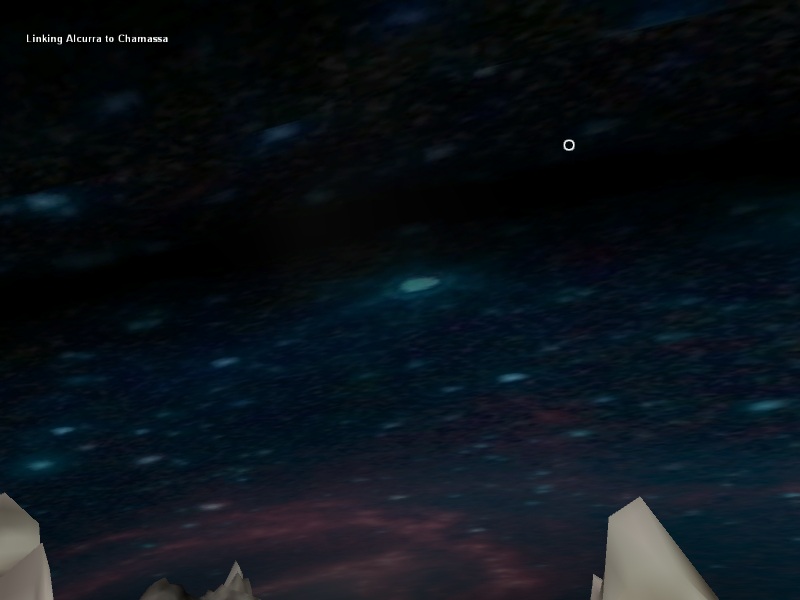 While I hadn't set a date for release, it has been postponed anyways. Last few days I have been getting a memory error. So far everything I have tried has not resolved the problem.

First I tried reducing texture sizes, some were over 1024x1024. I still had a memory error in about the same spot as before.

I remembered that PyPRP 1.6 was supposed to have a fix for memory issues. I was fairly sure I had 1.6, but I deleted my copy anyways and downloaded it again to be on the safe side. Still I got the memory error.

So I thought it could actually be too many things running. So I booted my computer in diagnostic mode, which load only the essentials to start Windows. Still I got the memory error.

My last attempt so far has been to remove the redundant trianglemesh bounds that were not really needed, well some not being needed yet anyways, such as roof tops, the upper portions of the tower in the city, etc. Still I get the memory error, though I am not sure but it may actually moved beyond where it was hanging before.

Here is the last traceback for the memory error. If anyone has further suggestions it would be greatly appreciated. 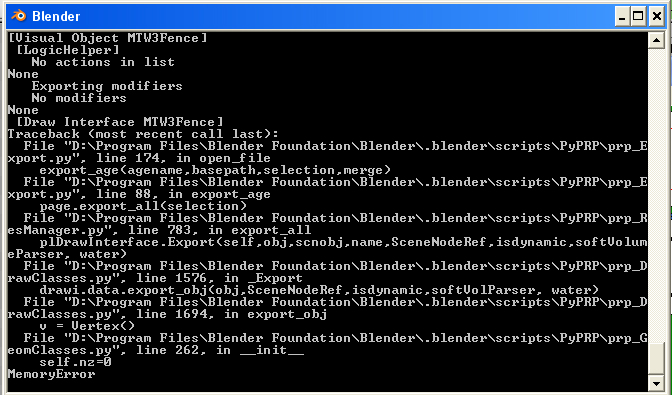 Make sure you don't have any huge meshes (not size but vertex-wise). Check the vertex count on the whole age by looking on the left side of the top bar in Blender (should say "Ve:" followed by a number). Apart from that, I'm not sure what to tell you. The error means that the visual meshes don't fit into memory for some reason or other.
Currently getting some ink on my hands over at the Guild Of Ink-Makers (PyPRP2).

I will look at everything Lontahv.

In the meantime I got closer to completion, removed a few more of the bounds - I should now be down to just essentials (walls, floors, etc).

This time I got a slightly different memory error. 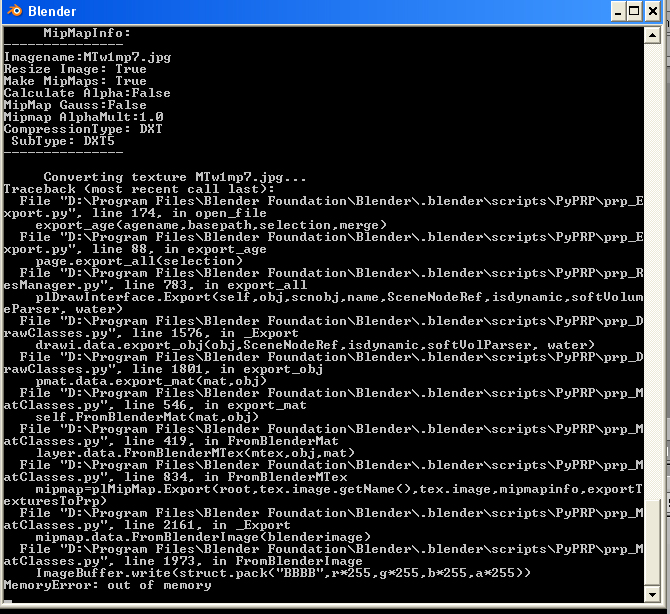 I finally got Chamassa to export again, thanks to both Lontahv and Andy. Now I am back to actually doing some work, fixing texture issues (mainly scaling), making it so you can see out the windows, enlarging the building (it's a good size for the avatar but not a practical size for what I want to do with the building).
MOUL Again Ki #'s
I.Brattin - 777796
Jayden Halliwell (IC Explorer) - 54404

Well as some of you know, I posted in another thread, I lost my 3ds Max files for Chamassa and Aquh. I decided with the release of the Max 2011 plugin by Branan (thanks Branan) to start over. The only thing I decided, at least right now, to reimport from the blend is the village. Have a look at the beginnings of Chamassa 2.0. Note these images from Max's Render not what is seen in game. I have yet to export as I still need to add pageinfo, lights, etc. 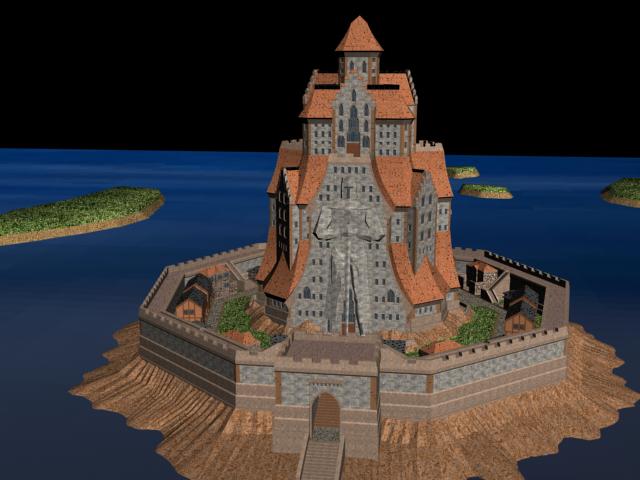 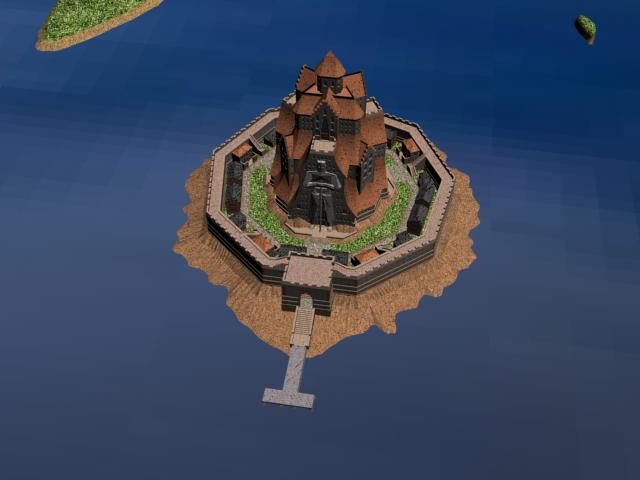 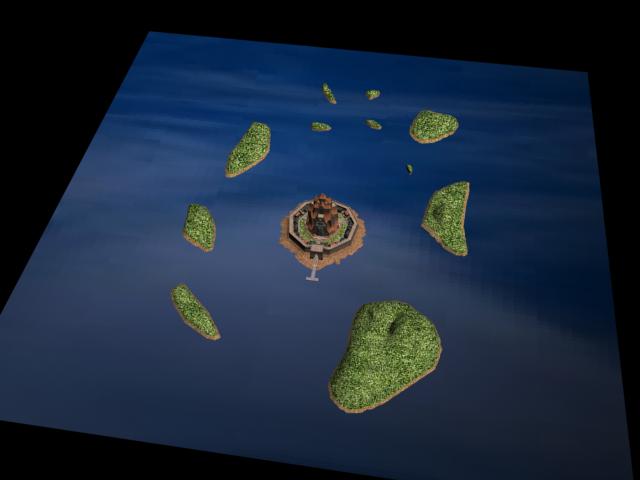