Deledrius wrote:Apologies, but that's the script-kiddie era. The hacker era that got everything rolling was 2004-2006. If not for that, we may not have gotten MOUL, and definitely wouldn't have MOULa, DI, or any of the current updates, patches, and Fan Ages that the tour is showcasing.

Ok I found Paradox's Blog from another thread on this forum board. He gave a good summary of URU history from the stand point of the explorers themselves and talks about the hacker era and what it implied. I can definitely agree that what we witnessed 7 or 8 years ago with the Fun House / Hood of Illusions was not what Paradox described in his blog. And yes now I can see the link between the tools developed back then (2004-2006) and what we have today. Tools & servers to play URU like PlasmaShop, PRPShop, Drizzle, Offline-KI, alcugs, plClient, Until Uru, dirtsand, MOSS, etc. I'm using them quite regularly. Now I know where it all started.

From the researches I made these last days, one thing struck me: 18 out of 20 links are unavailable, forums, blogs, wikis. The community has shrunk or got bored of waiting over the years.

The community has shrunk or got bored of waiting over the years.

People move on. That's what happen when a game doesn't have any new content. A game community, whatever kind of game, just needs content to live on. Making our own tools and Ages and get to the point where we are now was great, but it just took a long time to make. And the hard truth is there are just other games, and other content creations tools that are just plain better and easier to use; so people just moved on. No offense to our tools developers here, it's great that we have these tools and have fun with them. But I mean there are just other games, and other engines out there, and although they are not Uru, for content creators like me they're just easier to use.
But I do see a bit more activity here lately, probably because Cyan themselves have had a bit more activity lately, so that's been bringing more people back in. Hell, I was really surprised to see yesterday this statistic at the bottom of the board: "Most users ever online was 492 on Tue Nov 20, 2018". That was just a little over a year ago. I was surprised to say the least, I would have guessed the most activity the board ever had was at some point between 2004 and, what 2011? But things are picking up I guess. (unless there's been a surge in bots and spam on the board that I haven't noticed)

I've been pondering for a while what was with this date "December 3, 2008" that we see attached to more or less 60 ages in UAM tab (Drizzle). I visited some ages in the past, early ages, like you mentioned, and went through the journals. The journal entries can go as far as 2005-2006 in some instance. Your post confirms that those ages were uploaded all at once on December 3, 2008 but were already circulating before that date.

To solve this particular mystery, that is the date that Dustin (re-)added all the old ages to UAM (as in, launched the modern UAM that is still in Drizzle). Instead of trying to figure out the exact day that all these ages were released, Dustin just picked the current date.
Before Drizzle UAM, there was "ULM", the Uru Library Manager, and before that was the first incarnation of UAM (no relation aside from the name).

I "only" joined this amazing community in early 2007 (gosh, that's 13 years ago), so all the things before that -- the glorious time of Until Uru, the initial Alcugs releases, the beginning of fan ages -- is lore and sagas to me. But if you have questions about anything that happened since then, in particular anything relating to the Offline KI or Alcugs or DI (or Drizzle, I guess), I'll join the others here in doing my best to respond, "to the best of my recollection".

One potentially interesting piece of history from the technical perspective is the Offline KI changelog and the Alcugs changelog -- but this is just the public part of it. Offline KI was developed in secret before that because Cyan didn't want such powertools out in the public, and it didn't want Shards in public, so we ran those on private invitation-only servers. I have a secret changelog somewhere that goes back to 2007 and basically summarizes the technical history of the three Shards I ran... Deep Island and the two secret ones before it. I'll have to think about releasing that.

The second of these secret predecessors was the "Ancient City" Shard. A nice recollecation for what we did on the Shard is the age "Fena Barel", where you can find a written account (with some pictures as well) of the fan-run story that we staged around 2008.

I just ran into an age expedition on DI when testing a new age, and was so surprised to see so many people online. It's great! 5 years ago, I was half-expecting that the Shard would be dead by now due to sheer lack of interest (like, if nobody logs in to the Shard for half a year I guess we might as well shut it down). But, no, activity is increasing again thanks to initiatives like this, and I love it.

I attached a picture showing Shard activity (unique users logged in per day / week / fortnight), and as you can see this is the biggest spike since early 2017 (the spike back then was triggered by Dulcamara releasing Alabaster). Click here for full image. 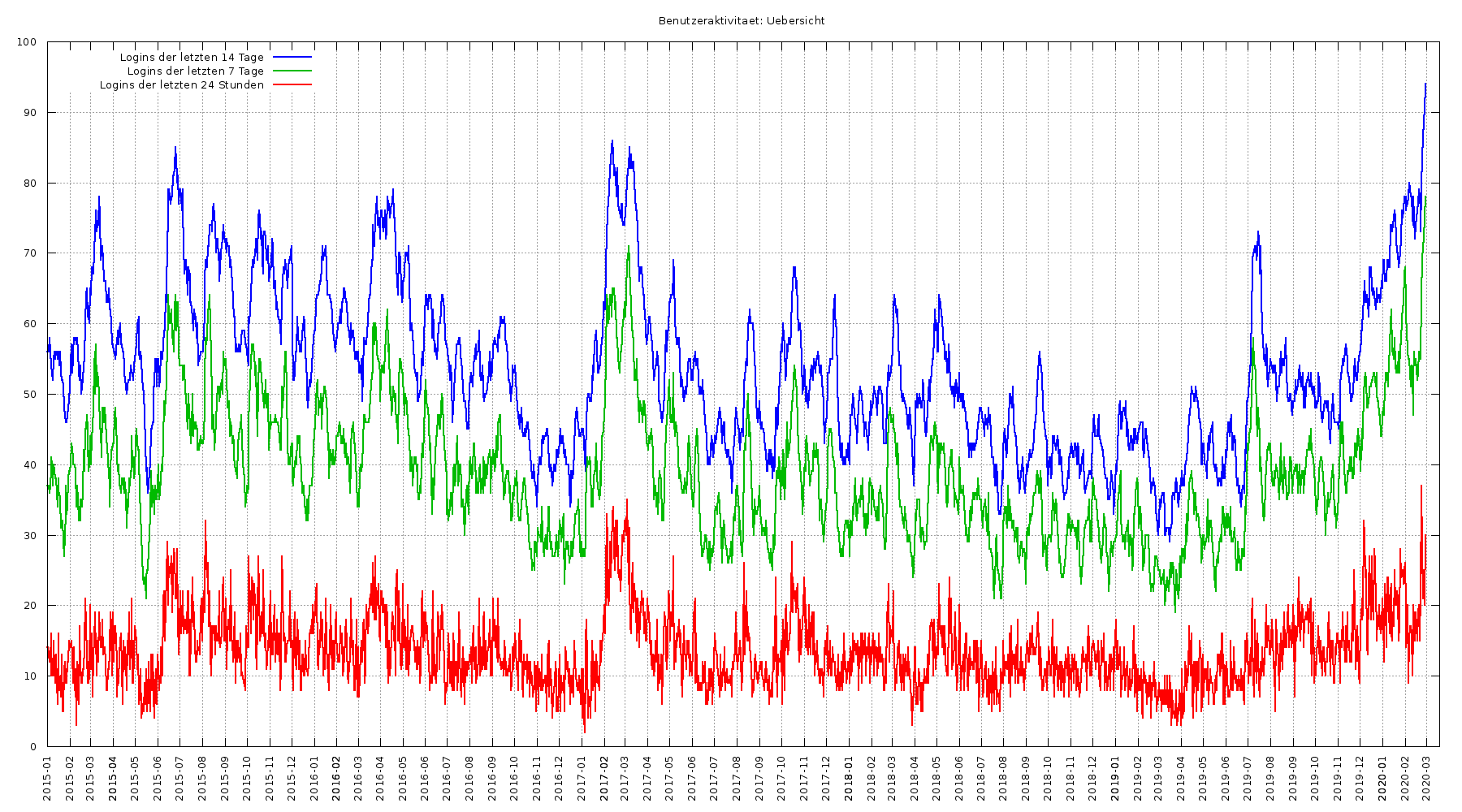 Aloys wrote:The last thing was that Ubi may not have been entirely confident with Cyan being able to deliver on the huge amount of regular new content they were promising at the time. Uru has a really ambitious proposal, one whole new Age or area every month. So that didn't help either. I had the planning in my hands at some point, and it was bonkers really, whole new Ages every so often, new areas for Teledahn and the Cavern every months, new gameplay features... it was all over the place. For naive 25 years old me that was exciting I really don't know how they expected to pull this off. These kind of games are complicated and just take *time* to make; even when you have lots of ressources.

I can't speak for the Gametap part of the story, but my guess is it was quite similar: too complicated, too expensive, not enough people. What I don't understand is how they expected to make it work the second time around when it couldn't work the first time...

That's interesting what you wrote. That would explain why Teledahn is such a nice age. In fly mode, you can literally go to the other end of the lagoon area where the waterfall is, and then follow the river stream up to its source far inside the land. I always wondered why that age was so much detailed. Doing all sort of glitching and jumping and combos in different ages, you get to see the "underside" quite fast. And for the most part, it is quite dull. There's nothing, literally nothing (e.g. Kemo, Tsogal, Delin, Gahreesen, etc) or sometimes like for example Eder Gira, there's a mock up of scenery, a circular band surrounding the age itself, which from the normal grounds give us the illusion of something far beyond but once on the other side of things, it's far from being interesting.

For Teledahn, even when you venture beyond the normal playground, the sightings are amazing. And that goes for D'ni-Ae'gura as well. I prefer Teledahn but the Cavern is very impressive, too dark for my liking.

Diafero wrote:The second of these secret predecessors was the "Ancient City" Shard. A nice recollecation for what we did on the Shard is the age "Fena Barel", where you can find a written account (with some pictures as well) of the fan-run story that we staged around 2008.

Yeah. I went in that age and read the journals there, 5 of them. I was wondering where the storyline unfold. See? So much of URU History I missed.


Great there are folks like you still around to share your knowledge with us. At the time I joined, the game was delivered "as is", take it or leave it. I can understand now how some explorers just left and went under fairer skies. But from 2010 to today, the community developed new content, new ideas came along, new shards to keep URU alive and there are still new developments to come.

Thanks for all your shares!

For the historians among you, this blog post (and generally the entire blog, it has been mentioned above) also contains some additional perspectives.
I prefer e-mails to "diafero arcor de" (after adding the at and the dot) over PMs.

So many memories... I was on COBBS (a Canadian BBS!) and Agebuilder. And Uru Obsession.
I remember the big WOW! with these early Ages. Also Pre-Swaltu, which was a bit confusing and difficult to visit.
Also was it Paradox who came up with the first Age with sound?
Chacal