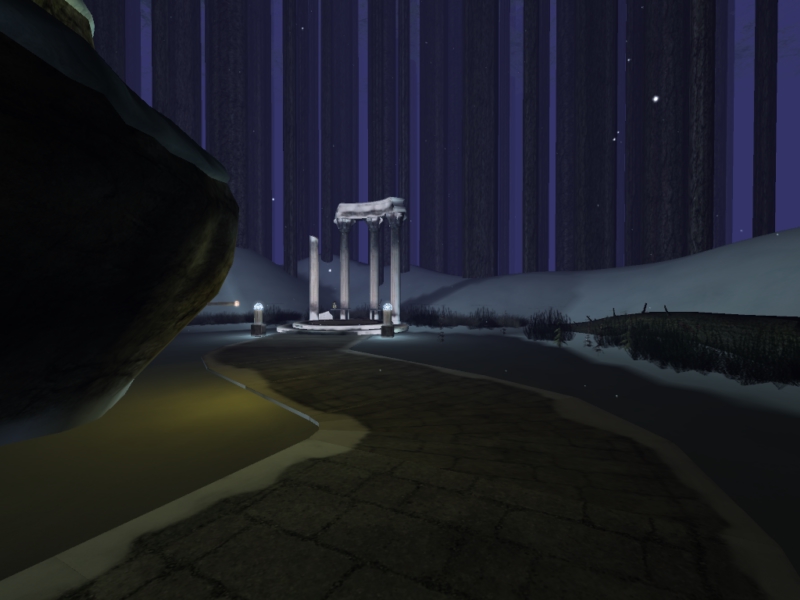 To remember Andy Legate, who recently passed away, the 4th expedition of the Fan Ages Touring Club went to some of Andy’s Ages. See Minasunda’s video.

First, we visited daytime Camp Bravo: apparently some sort of playground, it is actually meant as a training camp for aspirant Maintainers. All around the Age there are eight bugs of different type, intentionally put there to test your eye for detail. In a hut, there also are three volumes of a Maintainer’s Guide, with tips about how to report bugs.

Boot camp can take a full day, and the exhausted trainee may still be in the camp after dusk, and see Camp Bravo at nighttime. But it’s time to relax and enjoy the sight of the twin moons.
Fairly uncommon for the times, both Ages have good-looking (and in one case, swimmable!) bodies of water, and a catchy background music.

Next, we moved to Zephyr Cove – night version, the only one available on DI. A relaxing, beautiful Age with one of the most realistic shorelines, the only downside is the rather simple model for the beach chairs and unbrellas. Like Camp Bravo, this Age also has a Maintainer Marker.
Unfortunately, most of the visitors crashed while attempting to link there, so we couldn’t stay for long.

We then moved to Eder Bahvahnin (“Hidden Garden”), where the tall statue incited the skydiving spirit of one of us. A lovely garden, with a creek and a mountainous horizon. A discussion about sources for textures and models allowed me to mention the recent release of public domain cultural heritage 3D models.

From Eder to Eder, our next stop was Eder Tomahn (“Way Station”), a well-stocked bar (and lodging, apparently) somewhere along the Great Shaft. On the bar, a cellphone holds four recordings from Andy himself, mentioning people and places from the Devokan Trust storyline.
With few touch-ups, this station could be easily mistaken for a Cyan Age by all but the most keen-sighted visitors.

Before reaching our last stop, we passed by a small but useful library Age, Andy’s Nexus, a circular room with many linking books to Uru and Myst V Ages. A simple way of adding the Direbo book to your shelf, if you don’t have one.

Our last location was Serene, an Age with a fitting name... but a bit cold

In December, the Age takes a Christmassy theme, with a snowman, a tree and gifts. Serene is also an integral part of the Devokan Trust storyline, and there’s a journal hidden in a secret compartment.

A notable absence is of course Neolbah: I left this Age out as it is better seen in the context of the storyline it is part of, which we’ll get to fairly soon.

[edit] Answering my own question:
I had totally missed that piece of news. Well.. crap.

I really liked Andy. He'd been around for so long, and was so active. and.. 53? that's just wrong.

Younger than I am.
I had no idea, he was a good man.
Chacal

Aloys wrote:He'd been around for so long, and was so active. and.. 53? that's just wrong.

Far too young. Quite sad.

Andy was a great source of inspiration, his Ages are among my favorite, but more than that he was a really good man. He loved tinkering, he loved sharing, and talking with him was a real pleasure.

Andy was both help and inspiration to me and I'm shocked to hear of this sad loss. Thoughts are with his family and many friends.

At the moment to link to Zephyr Cove, my connection broke off and never returned. For this i have lost half of the tour. But me too i will said Andy have give to all developers a great help with his tutorials. Many of the job with ages is come to the light thanks too to his work. I have write condolence to his family, but here i will remember it with gratitude and sympathy.

RIP Andy, here you will always remain alive, because an end has not been written.

Thanks Korovev for reporting about andy's ages, he was a real good builder and a great friend!

Camp Bravo was the first age he built for us when we 'woke up' the Maintainers. We tested it hard and what a good time that was! Then Nighttime and Zephyr's Cove came next I think. And as other mention, between all the agebuilding he wrote all these tutorials for us and helped me and a lot of others with tips and help of all kind.

Thanks so much for these series of visits to the fan ages, it was my first endeavour on DI as well. Visiting Andy's ages brought back so many memories to the start of the maintainers, and those refuges to other worlds beyond (where I was taught the basics of maintaining by Dot, many many years ago). The legacy of Andy and his creations and dedication will always be a bright spark.

I'll for sure be spending more time on DI and all ages and hard work of makers it has to offer, I'm deeply in awe, there was no better introduction than this trip, thanks again.

Perhaps it’s time for a return of the Maintainers