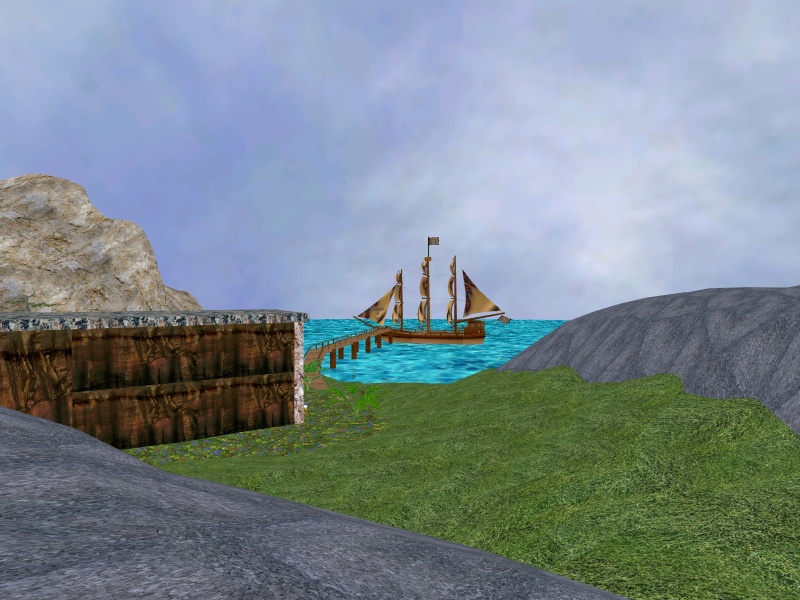 On the 6th expedition of the Fan Ages Touring Club, we visited Janga, Itep Edor’s first Age, first released in August 2006 on the H’uru shard.

Janga was one of the first Ages to have a series of puzzles with a backstory and a ‘prize’. The Age is wide and spread out, enough that many of us kept getting lost while others zipped from one location to another

The building and the puzzles were the work of the Guardian of Janga, Samor Sundar. One of the buildings have a small library with extensive research reports from Ayala, Cathy, Jana, Joorea, Katzi, Old Wolle, and Oldman. There’s a tunnel slide that leads to a secret area below the (swimmable!) coast, with a trippy platform to get back – put on some Led Zeppelin before using it.

A general tip for the puzzles is to look for the cat button and push it, then look around for a slowly rising wooden cone with another button on it. There’s a walkthrough book at the beginning, but you may want to read it only if you’re stumped

Hidden below the mountains, there’s a Nexus room with books to Takla Ma’kan, Jo’nae, Jo’nae Hood, Janga Lela and Katzi’s memorial. Janga Lela is the night version of Janga, with plants made of stars... you’ll have to see it.

Katzi was one of Janga’s early testers and visitors. Unfortunately, she passed away in December of 2007; her name is on the Kahlo Pub Memorial, and a building in Takla Ma’kan is dedicated to her.

Like many Ages of the time, the lighting may look flat compared to more recent Ages, but keep in mind that the tools available at the time were fairly complicate to use, and as a ‘korfah’ (first Book), it was an impressive feat. The puzzles don’t seem to keep their state between sessions, an issue stemming again from the non-trivial wiring of fan Ages on Alcugs shards.

We will visit more ages from the Huru.info group in the next weeks, so make sure to get familiar with the names in the journals, have a look at Janga Lela, and make sure to pay homage to Katzi, before our next adventure in the desert!

Next time: Takla Ma’kan, by the Huru.info group, including Itep Edor; another fairly large Age with puzzles. We’ll get there from the Nexus as usual, but let’s pretend we will be linking from Janga

Thank you Korovev for this excellent report!
It was a great pleasure for me to welcome so many explorers to Janga after all this time.
Maybe we will return there one day to play a little bit with the beach ball.

And maybe we will pay tribute to Samor Sundar.

When you visit Janga Lela it is a good Idea to listen to some good music.
Thank you to remember Katzi the good soul of all my ages.

And just to mention, I never worked with Blender or Python before. It was all learning by doing.
I remember when I opened Blender for the first time... I closed it immediately thinking that is much too complicated.

Just for the love of URU and because that was a chance for me, to meet other people as a single parent, I continued.
Janga and Janga Lela I created on my own, except the ship by Edwin and the pharos (we did not visit this time) by Rich.
Beside creating these ages, I did some restauration on the relto, the hood and the city.

The results you can see here, but beware of spoilers: