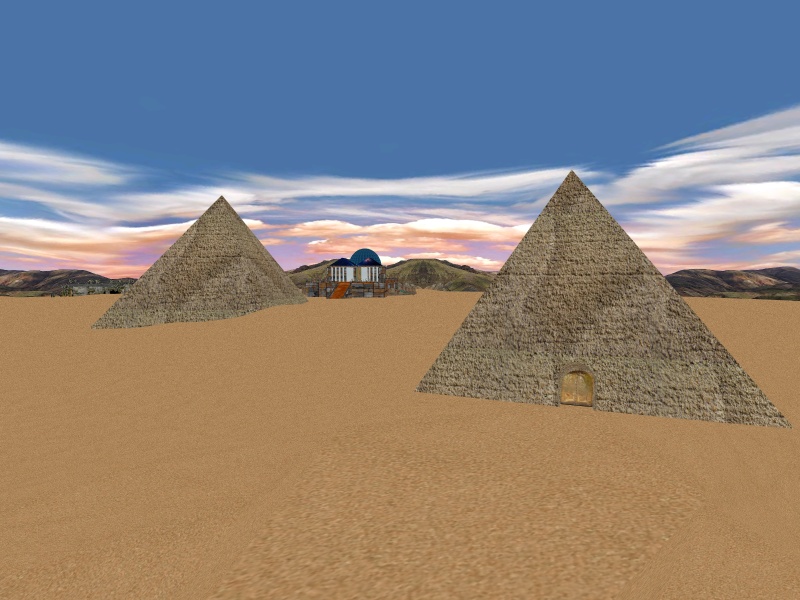 On the 7th expedition of the Fan Ages Touring Club, we visited Takla Ma’kan, the magnum opus of the Huru.info group (Katzi, Rich, Old Wolle, Edwin, Itep Edor), first released in March 2007 on the H’uru shard.

On first arrival, this Age looks deceivingly barren, but that’s because most of the ‘action’ happens inside the pyramids. Make sure to read the note right next to the link-in point, it has the rules and the ‘philosophy’ of the puzzles. And puzzles are the main feature of Takla Ma’kan!

There are all sorts of obstacles to overcome: labyrinths, math, associations of symbols, colours, shapes, etc. You really need to take notes and photos of any symbol or picture (including paintings!) you find along the way, especially because many of them will be needed long past the areas where they show up.
There are some puzzles of the ‘punishing’ kind, i.e. those that send explorers back to Relto or that reset the whole Age, which I’m really not fond of; however, they make sense in context, as the whole experience is a test of perseverance.

Various journals scattered across the various rooms follow two main themes: one tells the background of the Age, once home of a civilisation that at some point was visited by another race – you even meet four of them, or at least what is left of them

. The other theme is a ‘dialogue’ with the explorer, who is evaluated through the various puzzles.

All the symbols, colors, numbers, etc. are used together at the end, in the temple, to get access to the final location, which has a portal to a never-released Takla Ma’kan II.

Like all Ages of the time, this one too also has an issue with saving states between sessions (in that it doesn’t), so if you plan to visit in group, make sure you all start together or the latecomers will find doors that are open for you but close for them.
Also like many Ages of the time, all surfaces are slippery, so make sure you’re familiar with the backstep technique

Besides the main locations of the pyramids and the temple, there are a few more areas to explore (which unfortunately we didn’t manage to!). One is an area vaguely reminiscent of nighttime Minkata, with ruins of a sphere of unknown origin.

The other is Katzi’s Memorial, which is normally linked to from Janga. Another, slightly cheat-y way to get there, if you’re already in Takla Ma’kan, is to step into the tower ruins close to the link-in point and type “/jump -20”.
The Memorial is composed of a few areas that can be reached through teleports (clickable globes on pillars), but be sure to visit the walkway at the bottom of the long ladder in the statue room.

Next time, we’ll continue our exploration of the Huru.info Ages with Jo’nae, by Jonnee; a nocturnal garden Age with some puzzles. Since it’s not that vast, maybe we could make a quick visit to Takla Ma’kan’s underground before linking there

Once again I would like to say thank you to Korov'ev and the explorer who joined the expetition to Takla Ma'kan last sunday.
It was also a great pleasure for me, to welcome four of the fellow agewriters, Ametist, Corvus, Dulcamara and Wodan to Takla Ma'kan!
Too bad we could not visit all the places in Takla Ma'kan.

If you get one day to the Hall of the Creators, you will find a button near the statue of Katzi and near the statue of me. If you click on these buttons you will be ported to the memorial of Katzi or to my hut. Creating the memorial of Katzi was my only way to say good bye to her and to express, what I felt for her. The eternal candle you can also find in Janga. Katzi was the creator of the pictures you find inside her memorial. My hut was my farewell to Uru. After Katzi passed away, I just couldn't take it anymore to come back.

To return to Takla Ma'kan after such a long time was somehow a healing process for me. Thanks again to everybody who joined!

Yes, it was again a lot of fun to take part in one of the fanage tours led by Korovev.

I am glad that you enjoyed it too, Itep. So my call in the H´Uru Forum was crowned with success.
Nice, that also the other age writers were interested to explore these wonderful age.
I missed Wodan in my list, but there were really many explorers the last Sunday in Takla Makan and it was not easy to keep an overview

One issue that came up in Takla Ma’kan is how to deal with very large puzzle Ages. I can think of three possibilities, each with downsides:

Personally I’d go with the 2nd option, taking as long as we need. Setting the Age state could be quick enough, and it will probably became an issue only once we get to the latest Ages.
Gehn #137074, Deep Island #194197. Gahreesenomee biv keneet pishoeet b’set!
Want to know what’s going on in the Cavern? Visit the GoMe site.
MacOS wrappers, D’ni Lessons, DniTools, goodies.

Korovev wrote:Personally I’d go with the 2nd option, taking as long as we need. Setting the Age state could be quick enough, and it will probably became an issue only once we get to the latest Ages.

If only there were a /saveagestate or /loadagestate command in the Offline KI that could save the SDL values for next time. These are the times I really wish I knew Python. 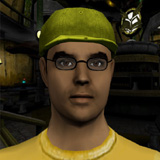 Doobes wrote:If only there were a /saveagestate or /loadagestate command in the Offline KI that could save the SDL values for next time. These are the times I really wish I knew Python.

That wouldn't be too hard to implement, actually. There are already these commands available (only for admins though):

Since doing this for all variables would quickly become annoying, maybe we could implement /saveagestate and /loadagestate to automate the process. Shouldn't be too hard, I'll look into it if it can help you.

Unfortunately, if I understand correctly, animations synchronized with "persistent states" are not accessible to the Python API. So some Ages which rely on those will not be saved.


There is another issue: Takla Ma'kan (and a couple other Ages) do not use SDLs at all. Players only know a door was opened if they were in the Age to "witness" it. If you link out, or link in after the fact, then to you the door will appear closed. If I'm not mistaken, this also means Korovev's third option wouldn't work at all in this type of Age.

Ooh, that would be cool, it sounds like a sort of workaround for the lack of instancing

Note that instancing isn't the problem -- enabling instancing for an age isn't hard. The hard part is enabling people to go to other people's instances...
I prefer e-mails to "diafero arcor de" (after adding the at and the dot) over PMs.