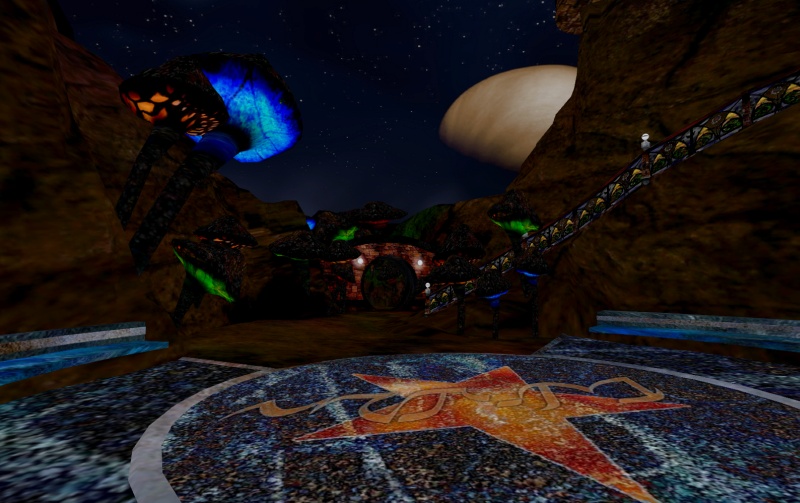 On the 8th expedition of the Fan Ages Touring Club, we visited the “exotic mushroom age”: Jo’nae, by Jonnee, first released in September 2006. See Minasunda’s video!

This is a (relatively) small garden Age set in (permanent?) night-time on some unidentified planet; close to the link-in point there are two huts and a dinner table. There is also a linking book to Janga. The huts have plenty of journals with reports, however they are all in German, so be sure to have a babel fish with you if you don’t speak the language

Many journals have D’ni titles on the spines, but it’s not real D’ni text; some of the few I managed to decipher read “Berlin”, “Musil” and “Heimat”.

The stairs next to the link-in point lead to a system of tunnels with a few rooms (and a DJ set), a planetarium and a balcony with a view to most of the Age; a bridge leads to a circular room, with a linking book to Jo’nae Hood.

Keep an eye on the the spherical lamps, they are the keys to open the various doors. Once all the doors are open, you will get access to a ladder, from which (I was not even aware of this!) you can ‘swim’ in the air above the huts; this is also needed to get access to the last door.

All in all, an excellent Age. If I had to find an issue, it would be the rather low resolution textures, probably the product of the computer power of the times. Like most Ages of the time, this one too also has the issue with saving states between sessions, and all surfaces are slippery.


As we had time, we concluded last week’s expedition to Takla Ma’kan by visiting the underground area, with a very long corridor and circular room with a tree.

Ah, Jo'nae and Jo'nae Hood were some of the first Fan Ages I ever explored. Those are some very fond memories.

Korovev wrote:you will get access to a ladder, from which (I was not even aware of this!) you can ‘swim’ in the air above the huts

Oh dear, I had totally missed that the first time I played through that Age way back (guess I didn't complete the Age..). I had however discovered that on my own when playing with swim regions, you don't need a visible mesh, or you can swim through any kind of stuff, like sand or jelly. Also swim regions behave strangely when you set them right and that opens some fun gameplay possibilities when you dig a little bit into it. I have long planned to make an Age that exploits that, for which I have an interesting backstory that explains it, but.. yeah..