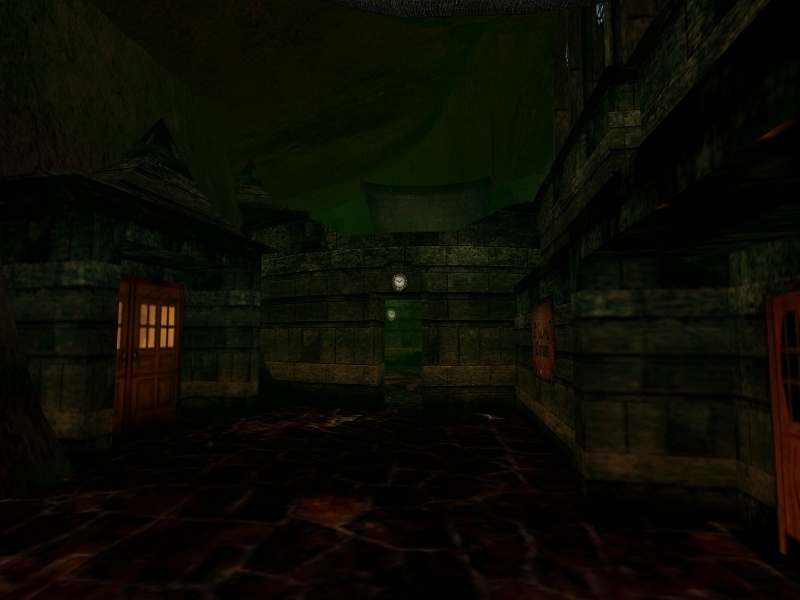 On the 9th expedition of the Fan Ages Touring Club, we finally visited the town immersed in a green fog: Jo’nae Hood, by Jonnee, first released in December 2006. See Minasunda’s video!

The Descent (for lack of a better name) has a series of platforms, blocked by gates that are unlocked with green lasers from the room in D’raen. Once you manage to get to the bottom of the Descent, you’re not done!

You’ll find a linking book to Jo’nae, but also a door to a tall, tall pillar with a ladder. Climb it, and you’ll get to the wonderful end area, the Shipyard (located, if you were wondering, behind the outer ‘ring’ of the stone pillars corridor with the planks). Be sure to press the button on the ship!

Personally one of my favourite fan Ages, if I had to find an issue it would be, like in Jo’nae, the low resolution textures, and maybe some background music. Like most Ages of the time, this one too also has the issue with saving states between sessions, and all surfaces are slippery.

While unlocking the gates only requires a few buttons, there are more red lasers around the Age, often pointing towards the wall, with no clear function or way to turn them off or green. If anyone has a clearer idea about their function, please tell us!

There are a few journals in German. In G’shen, there are two (solid) carpets hanging from the ceiling. The higher one can be reached with /jump 25, and you will end up on an invisible floor above the district. The lower one can be reached with /jump 20, but also in a legitimate way by (slowly) running against a sloped corner next to the entrance and walking along the wall.

This Age has quite a few /spawn points, so if you get lost, you can backtrack to a known position.

As an experiment, I’ve jumped on the Twitch bandwagon and streamed the expedition; we’ll see where that goes

Next time, we’ll visit three Ages from Nadnerb: Tunnel Demo, Box Age, and Odema. The first two are incomplete demos, which will allow us a rare peek into the Age building process!
If we’ll finish too early… I’ll pick up two–three more Ages from other authors

This Age offers a lot of intrigue and adventure! Around every corner is another unique area to explore, with interesting puzzles and navigation/platforming. There are a lot of details to wonder at.

I agree with Kor's ideas for possible improvements, and I would like to add that I think it would be cool if the story of the Age was presented upfront, to give some context to the town, the ship when it is discovered, and so on. I think that would make it even more wondrous to explore.

As for the red lasers: we figured out that they each point at a map of the Age on the wall, indicating the location of each laser!

Thanks for the tour!

You made me want to explore this Age again

I like it a lot too.
More sounds would be good. Texture resolution I can live with, though. Even with low-res textures and "fake" lighting, it still looks really good IMHO.

I agree with all of the above. Jo'nae Hood is an experience that shouldn't be missed. And, is worth additional visits.

This is one of my favorite fanages. Reminds me on Crowthistle ages. I love the green areas and the Mystic atmosphere.

I have made a version of Jo'nae Hood without slippery floors. States are persisted. There are some surprises, too. This will work where you're using UAM. Feedback is appreciated. In particular, let me know if I've missed puzzles.

I have put a linking book to an interesting area of Jo'nae Hood in The Sprite Gallery in Deep Island.

I look forward to checking out these changes.

This reminded me of Jonnee's last project, Breldur, which was never completed. Does TikiBear have Jonnee's Breldur files? I would sure love to see it completed someday.

I don't have Breldur's files. I wonder if they'd be Max files.

BTW, Minasunda has offered to provide an English translation of the mystery journal's text.

Thanks to Minasunda, I have an updated Jo'nae Hood file with her English translation of the GORGAS story book.
In addition, I have managed to free the solar sail hinges on the Jo'nae Corsair. Note that the vehicle would otherwise not fit through the portal.
Feel free to report issues or wayward gnomes.