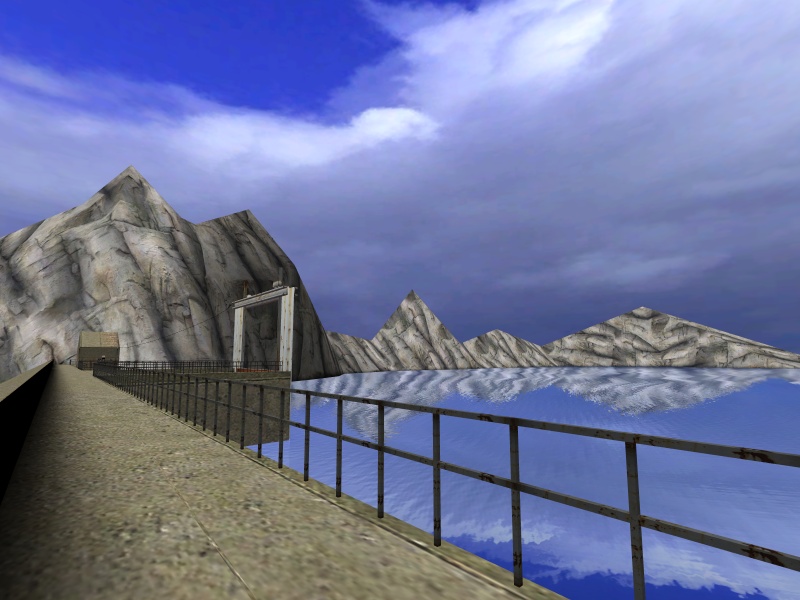 On the 10th expedition of the Fan Ages Touring Club, we visited (or tried to) Nadnerb’s works: Tunnel Demo, Box Age, Odema. The first two were released in February 2008, while Odema was released in December.
An interesting feature of the first two is that they’re not complete. Most Writers are rightly unwilling to release their work before it’s in a more-or-less finished state, Tunnel Demo and Box Age have bits without textures or proper lighting, which I think gives some interesting insight into the Age-building process.

Tunnel Demo starts (if you’re in 3rd-person view) with a panoramic tour of the Age, set in a dam. At the link-in point, on one end is the titular underwater tunnel – under Rivenese water, it would seem!
On the other end, a spiral tunnel in the dark leads to a room with a turbine, a second room with the generator, and eventually the surface. Outside, you can open the dam gate and climb down to the shore. The water is swimmable, and a /jump -40 while swimming will send you back to the outside of the underwater tunnel.
The Age is really good-looking, and the various parts of the dam are actually connected together in what would be a functional way (they don’t actually move). Most surfaces also have colliders, so even if you manage to get outside the normal boundaries, you won’t panic-link right away. The only visibly unfinished part is the tent by the shore, without textures or an actual entrance.

Box Age has three parts: the first feels like a church, with an organ and tall windows; outside it’s night, you can see a forest (in what seems to be winter, as there are no leaves) and a rather large moon. The organ works... if you jump on it

If you’re in 3rd p.v. and position the avatar correctly, you can look inside the lamps on the walls.
The second room (the actual link-in point) has a fairly functional mirror, you can even see your avatar (only in 3rd p.v.). There are four three, simple-looking lights around the mirror.
The third room is upstairs, but the doors to it are closed; you can get there with a /jump 20 while standing close to the mirror. The room is empty, save for a stair that leads to a middle floor. The stair and the middle floor are untextured, but illuminated, and the light on the floor suggests that windows were planned for this room. I’d love to see how this part was meant to look like finished!

Odema is a forest, in the night. A path on the left leads to a bridge, with a small waterfall, and is blocked by a fallen tree; the other path is also blocked by a tree. Right in front of the link-in point, there is a house from a giant mushroom. Manesmo was here? Or a giant Smurf?

The whole Age is really good-looking. With a couple of well-aimed /jump, you can get inside the mushroom, which actually has a modelled interior, with a corridor that leads to an otherwise inaccessible part of the forest, with a (non-working) linking book on a stand.

Unfortunately, while attempting to link to Box Age and Odema, most of us crashed and couldn’t get there; it seems to be an issue related to lighting and the way the tools of the time exported the Ages. Instead, we visited three more Ages by other authors:

TINA Testing Area, by Valdez, released in May 2008, is a simple-looking Age meant to showcase some ‘best practices’ in Age-writing, from placing of textures to positioning of colliders. A linking book in the large hut links to the Observatory (thanks to Diafero who fixed the link!).

Prad, by D’Lanor, released in November 2008, starts in a garden delimited by a fence, with a closed gate. Outside, there is a floating, bobbing giant ring, which you’ll need to get to, to see night-time Prad (hint: you need to jump over the gate). Interestlingly, the Age seems to have a light cycle in day-time!

Aerie, by Kierra, released in November 2007, is a relaxing villa in the middle of a lake, with a lush garden and a dock. In the distance there’s a forest, and it’s nightfall. There are journals on a table, but you can’t actually read them, so the fate of the villa’s owners remains a mystery. There’s a nice transparency effect in the window that looks on the lake; the water however is static and not swimmable.

You said it all Kor!

Very intriguing Ages by Nadnerb and others with lots of interesting ideas. Would love to see them developed further...