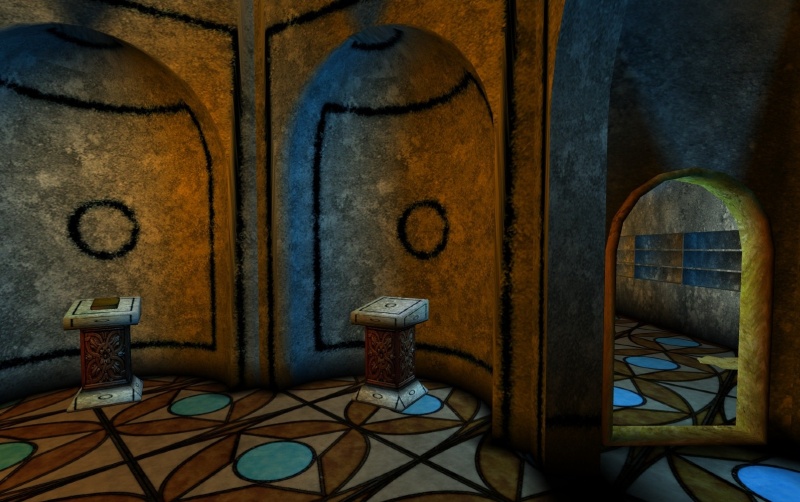 
Toroolbah (released in November 2008) is the ‘Nexus’ for the other Ages, and Whilyam’s office; in fact, the name tor(inai) oolbah means “cold office” in D’ni.
One of the doors can be opened… but the button is inside! You’ll need to link from somewhere else

. Inside there’s a desk, a non-working linking book and a dozen journals, all readable, with short stories about the D’ni, God and kings.

Bimevi (released in December 2008) is an oasis filled with palm trees, surrounded by a rocky wall, somewhat reminiscent of Eder Kemo. A journal close to the link-in point tells the story of the Age, written in 4766 DE by Writer Neereth, and tainted by chemicals used by two D’ni rogues. The floating statue represent Neereth’s father, and the coloured lamps represent virtues like faith, generosity, etc.
A Bimevi II was planned, but never released. The rim of the wall that encircles the Age is walkable, if you /jump there.

Fens (released in October 2008) is a, well, fen immersed in a green fog. Birds fly high above, and sometimes one can hear a (rather worrisome) roaring. Large alien trees grow all around, along with discoid ferns (’fantails’).
A journal describes it as an ‘open-source’ Age: the cataloguing of the plants and animals is (or was) a work in progress to which all explorers can (or could) contribute. However, there are only four entries for plants: fantails (dioecious), stonecap mushrooms, tendril trees and blue sacks. No entries are recorded for animals.
In this Age should also be hidden a linking book back to Toroolbah’s room… but I couldn’t find it

No one could find it, though, so apparently I’m not completely clueless

. As in Bimevi, the rim of the wall that encircles the Age is walkable.

Maw (released in May 2008) is a vertical, bottomless chasm – presumably close to the sea, judging by the sound that comes from above – with pillars protruding from the walls and four small caves on the sides. No journals are present, the history of the Age remains a mystery.
To get to those caves, one has to fight vertigo and be good at jumping! The general trick is to avoid running, except for the bottommost cave, most easily reached by run-jumping to the longest pillar then run-jumping to the cave. This last cave will greet you with victory music.


The notable omission from the expedition was of course Sholek’s Temple. We will visit this Age at a later time, for two reasons: one is that it was released later, in 2010; the other is that it was part of the D’ni Location Contest, so it’s better seen in that context.

Next time, we’ll visit the Ages from the RAD and DAWN contests! There are quite a few in this set, so it might be a two-part expedition, especially if we decide (poll!) to revisit the Ahra Pahts shells.
(Previous tour: Nadnerb’s Ages + extra)
Gehn #137074, Deep Island #194197. Gahreesenomee biv keneet pishoeet b’set!
Want to know what’s going on in the Cavern? Visit the GoMe site.
Check my macOS wrappers, Fan Age Expeditions, tools and stuff.