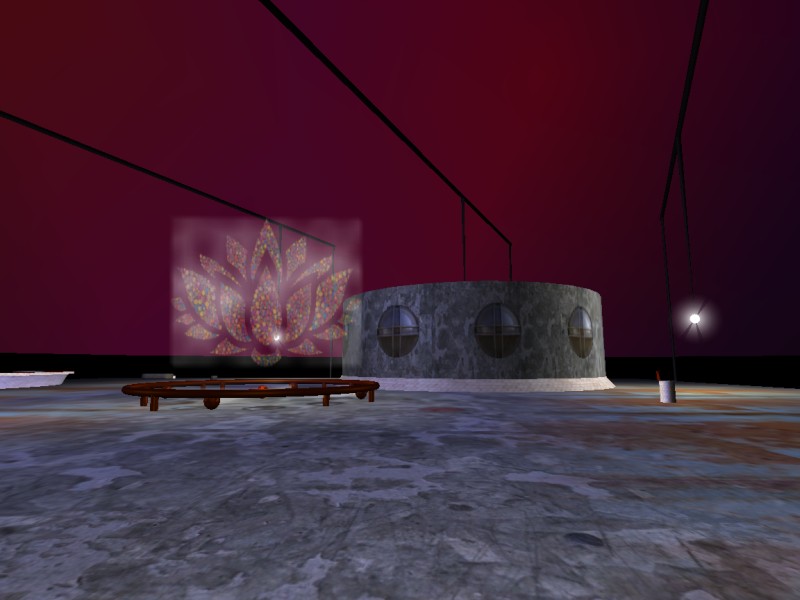 It did not occur to me that anyone wouldn't know who I was.

The Sprite Gallery continues to display Korman features, some that I have ahead of the main branch.
The Gallery introduces Work Lights which make parkour surfaces and other colliders visible. Thus, you can have visible clues, or not, as you wish.
The main imager shows me with some Work Lights in Phil's Relto. The safety fences, parkour faves, are made visible by the lights.
Having transparent scaffolding that you only see when you need to is turning out to be quite useful. What I didn't expect is that it's also beautiful.
I imagine that The Gallery resides on an island. The original plan was that the outside be vague, just for background, but it has been incorporated to some extent.

Paper Pagodas could use some Easter eggs! I think the Great Bird was restored after our tour. It was also part of the original version. Now that I have subworlds working I should have it carry explorers off.

The camera would never behave for the original Duck Knee (see the Relativity age to experience that). I went a different direction with the subworld dynamics this time. Only with my latest Korman update do the subworlds finally behave!

I haven't used SDL, yet, so there is still only Korman node logic.

I have updated the elevator in the Chamasa Restoration to SDL. Once things are "finalized" I'll release the Blend file. Please try out the age in DI. There's still a bug at this writing. I have submitted an update.

The logic is based on the elevator script for Teledahn.

There's a work-around for Korman not yet having animation event detectors: A kickable in a box is used to trigger animation sensors.

I will include the experimental Korman subworld patch in the Blend file. It corrects some issues with collisions, animation and geometry. Issues that hamper subworlds.

The elaborate node tree for the elevator is cool. Node trees are finicky about wire ordering and this is no exception! I wonder if there are rules written down somewhere.

I applied a dynamic avatar subworld to the windmill. It helps make moving objects interactive.

I am pleased by my first foray into SDL.

Maybe getting feedback at this stage is a good idea. Here is a link to a version of the age file. The Python file with the patch is included.

With Korman 0.11a there is no need for a patch. Here is an updated Blend file.

I have been unable to get the Chamassa Restoration elevator to work properly in DI. The ground floor animation sensor fails. I am going to leave it for now. It works in PoTS/URU:CC.

I have a secret work-around for Deep Island. If you walk next to the wall past the plinth with the book then the elevator will be turned back on, though it will think it's on the second floor. You'll be able to ascend.

It didn't take me long to run into Korman's limit on the number of mesh vertices. I have a scheme to break them apart and maintain continuity of normals for smooth shading. I have a sample Blend file with a terrain mesh with over 65000 polygons.

The split sections have invisible overlaps to force matching normals across boundaries. The seams are thus invisible WRT to shading continuity.

Let me explicitly point out that this technique isn't useful for flat-shaded meshes. They don't need matching normals.

The Blend file includes the original mesh, though it is not exported.

Please let me know if there's a simpler way to accomplish this.