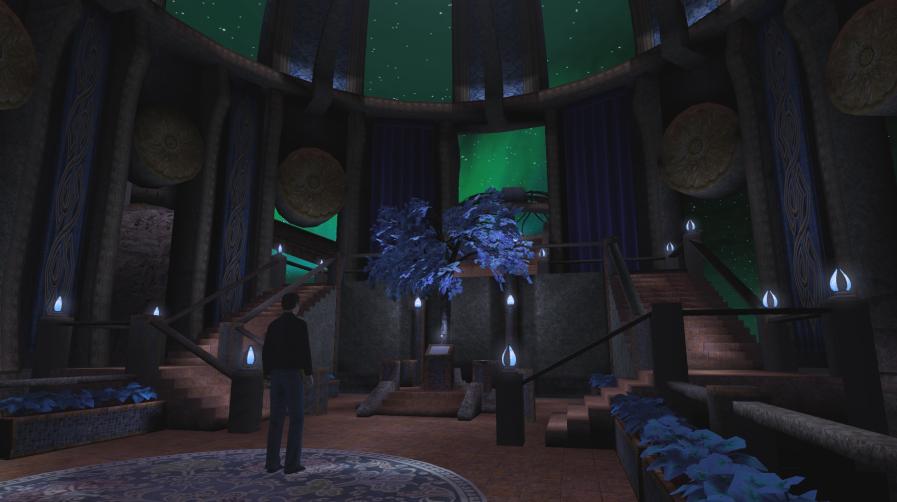 Our first stop was the Guild of Messengers’ New Pub, originally released on Gehn.20 on June 7, 2014. Based on a post by Afalstein and implementing some ideas by Tweek, it expands on the general structure of the Guild Pubs by adding an actual bar (with a working, water-saving sink), a second floor with a conference room, various privacy rooms and plenty of little details.
Until recently, in Gehn (and still in the Open Cave) it replaced Cyan’s original Pub. With the recent Gehn.27 release, the original Pub was restored, the book for the New Pub is now found in Chiso Preniv, along with the other fan Ages.
The door to the bar kitchen is now open, and a book to Chiso Preniv can be found there. Two curtains on the upper floor hide areas of the Pub not yet, ehm, open to the public. The Arc of Kerath can be seen from the conference room window, placing the New Pub in Ae’gura.

Maybe superfluous to mention in the Guild of Writers’ forum, but the mean to eventually access fan Ages on MOULa has been an open topic for many years; apart from some extravagant suggestions, the two most promising concepts have been the Gateway Nexus, which is still being worked on by Tweek and almost ready, and Sevkor, an actual library that was planned to hold enough books for all the fan Ages. The work on Sevkor however was put on hold indefinitely.
In November 2016, Doobes took on the challenge and started building his own idea of a fan library, culminating in the release of Chiso Preniv (slang for “Another Archive”) on February 26 this year, on the Gehn shard, and a week ago on DI.
There are numerous bookshelves on two floors, enough to hold all fan Ages ever released many times over, along with a circle of podiums for featured Ages, and a few desks. On Gehn, the podiums also have books to Tre’bivdil, Vothol Gallery and Fehnir House; on DI, only Doobes’ Ages are featured.
The link in point has mosaics of a few familiar Ages (try guessing which). The large, decorated window (from which sunbeams shine through) faces a hilly landscape. Explorers are advised against trying to jump outside: Clippy is known to roam the territory in search of victims to help.

After Chiso, our last stop was Veelay Tsahvahn (“Eternal Soul”), the Memorial Age. Greatly expanding on the Kahlo Pub Memorial concept, Doobes dedicated an entire Age to remember all the explorers that passed away in the last twenty years or so. And the little friends

The visitor is welcomed by House of Reminescence, a music track written by Mystler specifically for this Age.
A stair path going upward is divided in four stations, each representing an element; on the last station (fire), five podiums hold journals with short biographies, mirroring the OpenUru wiki page. Another path runs all around the Age, surrounded by water and floating lamps, with vistas on the gorgeous night sky.

All three Ages are excellent examples of the results that can be achieved with the available free tools, dedication, inspiration and perspiration.

Next time (May 24 at 11:00 KIT), back to the regular programming, we will begin our journey through the Geologica series by Ametist and Metabasalt, ten educational Ages about Geology of varied complexity. Until then!