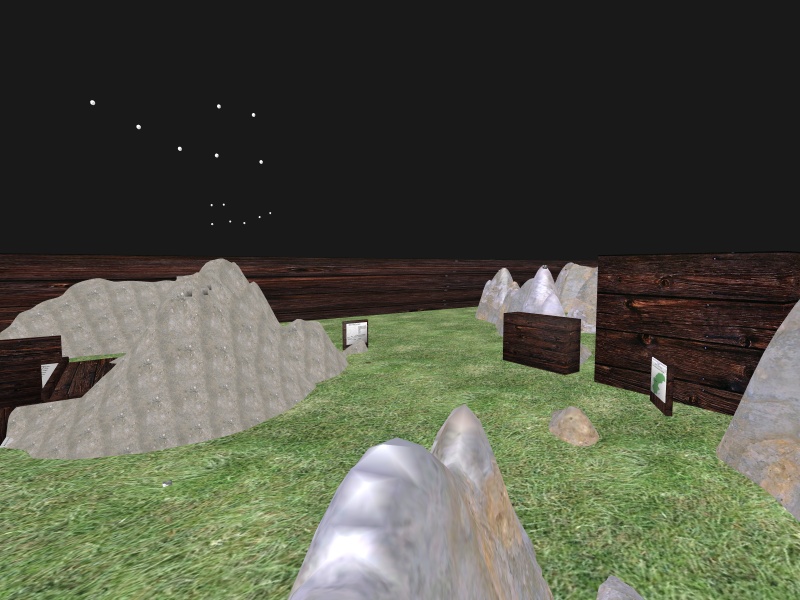 On the 15th expedition of the Fan Ages Touring Club we started our expedition to the Geologica Ages by Metabasalt and Ametist. See Minasunda’s video!

The series consists of two groups of educational Ages (they were, in fact, used in Metabasalt’s classroom): one is named after geological eras, the other after locations on Earth. Most of the Ages are interconnected, Dragon’s Tooth in particular act as a hub. Here is a chart of the various connections: 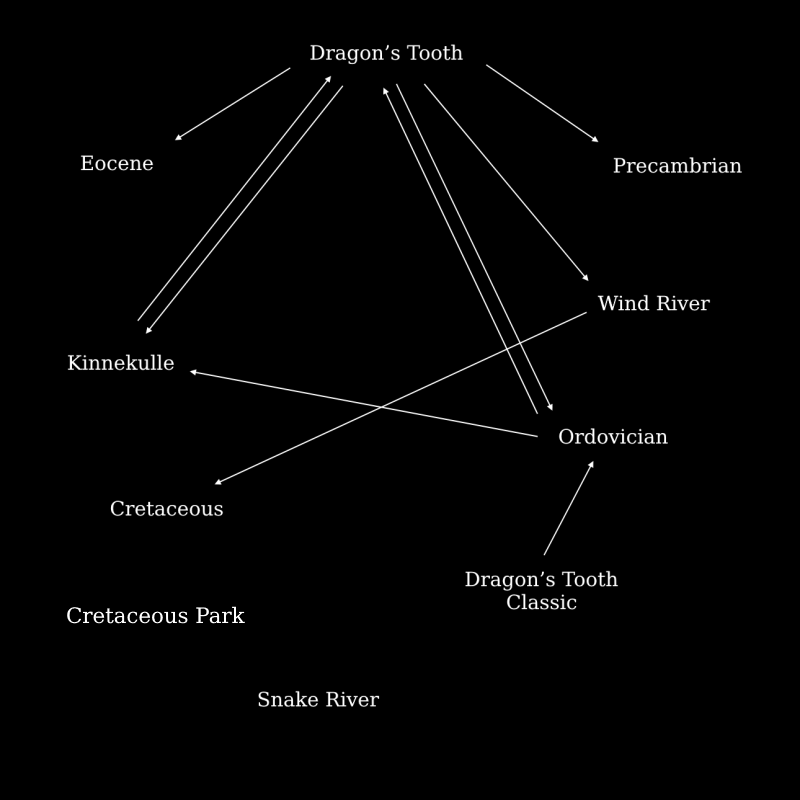 Our starting point was Dragon’s Tooth (DT), by Metabasalt, originally released in July 2008. The Age is based on an actual USGS elevation file of the Dragon’s Tooth hiking trail, near Roanoke County, Virginia. It also has the most elaborate (and math-heavy!) exercise in the series.

Near the link-in point (LP) there is a wooden structure: the Alfred Wegener Paleogeographic Research Laboratory. Only authorized personnel can enter! On the roof there is a world map; four (groups of) nations are on moveable blocks. Running around the Age, you will find a journal that explains the exercise: you need to move the nations in the position they were 450 million of years ago (mya), at the end of Ordovician and the beginning of Silurian.

The journal has data about fossil genera found in England, Africa, South America, etc. (but none for North America); some more data is in a journal in Kinnekulle. So you can calculate J for three of the blocks, but you will need to count the fossil cubes in the Age to know how many are in North America (51). The distance can then be calculated using the correlation D = (J – 0.3949) / –0.0000318 [km]. Using the length of the Earth circumference, you can then convert distances in degrees. Which site of the prime meridian each nation should be placed is left as an exercise to the reader.

Solution: North America 46 W, Sweden 9 W, South China 6 E, Australia 34 E.
Once the nations are in the right place, a large wooden door on the side of the Lab will open; inside you will find… a closed gate, but also two Linking Fossils to Ordovician and Wind River.

In front of the LP there is a map of Sweden, with directions to Mole Hill and Mount Rogers. In Mole Hill, you will find basalt hexagonal columns; the central one will link you to an Eocene version of Dragon’s Tooth (there is no link back to DT there, though). In Mt. Rogers you will find a Linking Cube to a Precambrian version of DT (again without a link back). The Sweden sign itself will take you to Kinnekulle, in Sweden.


We then moved to Ordovician (485–444 mya), by Metabasalt & Ametist (with music by Bo Albinsson), originally released in August 2008. This and the next two Ages are versions of DT in different eras. There are no puzzles here, but there are trilobites in the water! A sign shows the position of Fennoscandia 450 mya. A Linking Shell (that looks like a candy corn) close by links back to Dragon’s tooth; another shell on the far island links to Kinnekulle.


Precambrian (4600–541 mya), by Ametist & Metabasalt, was originally released in January 2009. Lots of snow! Pity that, of all places, in this one the avatars won’t slide

There’s a lump of snow in the water that moves. Care should be taken walking around, quite a few parts of the walls aren’t solid, and will let the avatar fall through.


Wind River (Cretaceous, 80 mya), by Metabasalt, was originally released in May 2009. The exercise in this Age is to calculate the distance between Wyoming and Germany, using fossil data.
The correlation (from a paper by Metabasalt) this time is D = –(ln(J) + 0.75209) / 0.00036 [km]. The number of genera in each location and those shared can be found in the journals again. Of course, there is only one clickable area on the map, but that’s not the point

Clicking on the map will link you to Cretaceous.


The first part of this expedition ended on Dragon’s Tooth Classic, by Metabasalt, the original version of DT re-released in September 2009. There is a sign with a multiple-choice question about the rock type; again, there’s only one clickable area, but you still should try to answer before clicking

Clicking the button will give you access to a ladder going underground, an area (made by Andy Legate) replicated in Eocene, but here there’s water instead of lava. There’s also an even lower level, which has a very large plank that can be moved around and used to get out of there. Close to the LP, a Linking Cube, near a vertical tunnel down to the cave, links to Ordovician.


These Ages may not be visually impressive, but are a great example of how games can be used in an educational context, to illustrate topics and make a class entertaining.

) Twitch stream will be available for the next two weeks.

Next time (May 31 at 11:00 KIT) we will continue the journey through the Geologica series. Until then!

A chronological visit of these Ages would be:

Thanks Korovev for a well guided tour, you had certainly done your homework!

Thanks also from me Korovev. It is always a pleasure to take part in the tours. For a lot of Ages I have so far had no background. Well, thanks to you, the gap is closed.