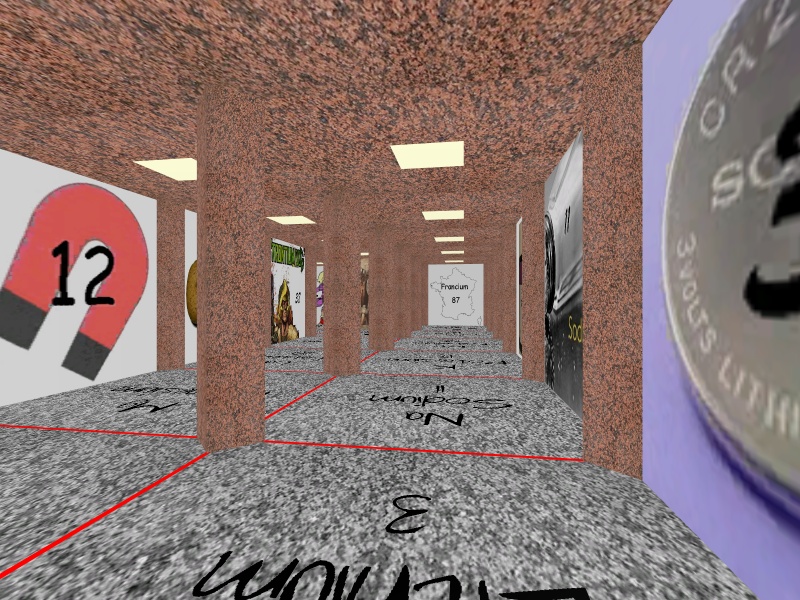 
Noidrocca, first released in November 2008 but updated many times since then, has the same basic structure of Enobmort, a bit simplified: there are two cubes, long curved corridors, the lavatories, and the journals by Gibson. The Age differs in two notable features: there is a balcony looking at a cloudy sky – without a visible ground – intended as an easter egg for skydivers; and an area at the bottom of the Age with mnemonics for each element in the periodic table.

Like Nilodnam, Noidrocca is mostly a work in progress (the non-working door with the combination lock is here too); J’Kla plans to extensively rework his Ages using Korman, adding a more natural light and expanding the periodic table with the most recent transuranium elements.


Cidoirep, first released in November 2010, consists of only the basement part of Noidrocca, and was its prototype.
Personally, I think Cidoirep works better on its own, rather as part of another Age.


Nilodnam, first released in May 23, 2011, has the labyrinthine nature of Noidrocca and Nilodnam, but quite smaller, and is a gallery dedicated to all fan Ages. There are paintings of many Uru Ages and of all the fan ones, save for the very latest, including a 'recursive' painting of Nilodnam itself.
There are a couple of long sections that consist of the same Ahra Pahts painting repeated many times; probably meant to have scenes from each shell.

Expect some news I am trying to see if I can export my current working in a format suitable for Deep Island.