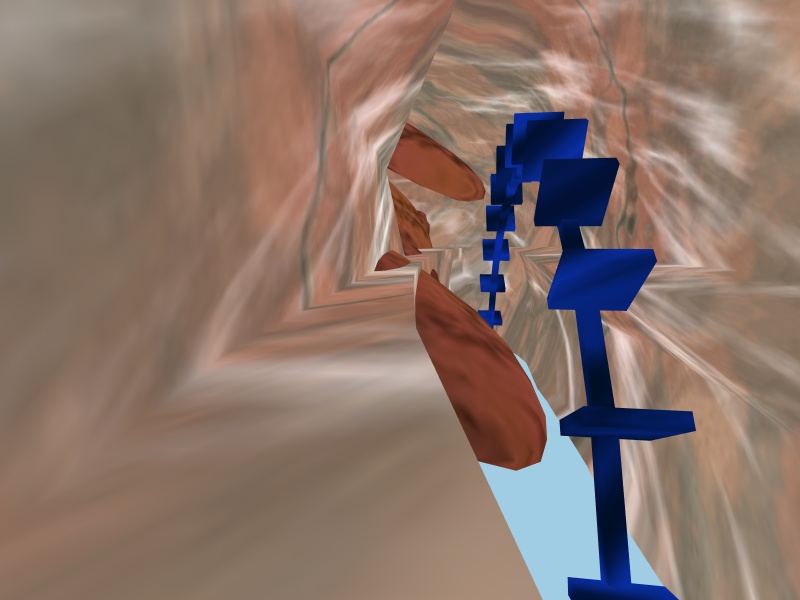 
Pre Swaltu is basically a large wacky playground, with no specific story or puzzle. Graphically it is simple, but has many hidden details; in fact, the simple graphics work well here as they make secret passages harder to find.
The visitor first links on a platform floating in the air, next to a giant pendulum. On the first fall – did I mention all surfaces are slippery?

– the blue sky will be revealed as being the inside of a large, egg-shaped space.
Running inside the pendulum will make it swing; with enough people and coordination, it is possible to make it swing very fast.

Next to the pendulum, there is a helical ramp and a conical structure. At the base there is a control panel that (in theory) should control the shape of the objects floating around, like in Jalak.
If you manage to walk up the conical structure – a trick much harder than the vault in Kadish Tolesa – you will reach a large rock with three tunnels. One leads to a shaft with a giant white crystal in the middle; at the top, there is a cave with many empty bookstands and bookshelves, one of which divides the cave in two. Another tunnel leads to the other side of the bookstand cave.

The middle tunnel, after many twists, lead to an area above the pendulum; you could also get here using the pendulum itself, with some acrobatics. With more swinging of the pendulum (or a /jump 110 from the link-in point) you can get to the upper level, with two more tunnels. One leads to a purple cave, to which we will get later.

The second tunnel leads to what could be considered the ‘main’ area of Pre Swaltu, the skating arena. Ten ‘iceboats’ are lined on a start line; there are seats for a crowd, a tower for the judge, seven VIP rooms (one is without seats).
Unfortunately the boats don’t seem to move at all, unless there is some secret button

But there is more! Above the seats, there is a hill with sleds that connect to two conical towers; the trick is to run towards the sled, or jump right on it, and keep running to make it move. The slim tower hides a (non-working) lift. At the base, another tunnel leads to the purple cave mentioned earlier.

The larger tower hides a labyrinth; it appears complicate, but you just need to take any tunnel going down, if you entered from above, to reach the base. Amusingly enough, une of the openings at the top is right above an entrance to the bottom, if you wish to run up again and again

All these different areas and structures make Pre Swaltu a very entertaining Age to explore, especially with a group.
There is no background music, in fact there is no sound at all, which can make you think something happened to the audio.
It would be interesting to see how it would look with better graphics, however given the vast, open spaces, perhaps it would become very lag-prone.

Oh my god, I remember this one, that's one very old Age from around, maybe 2006 or 07. I agree that it was really a big maze, but I remember it being fun.

There is no background music, in fact there is no sound at all, which can make you think something happened to the audio.

I might be wrong, someone correct me, but I think it's just because it's so old at the time we might not even have the tools to put sounds in Ages.

(my memory is a little fuzzy here)