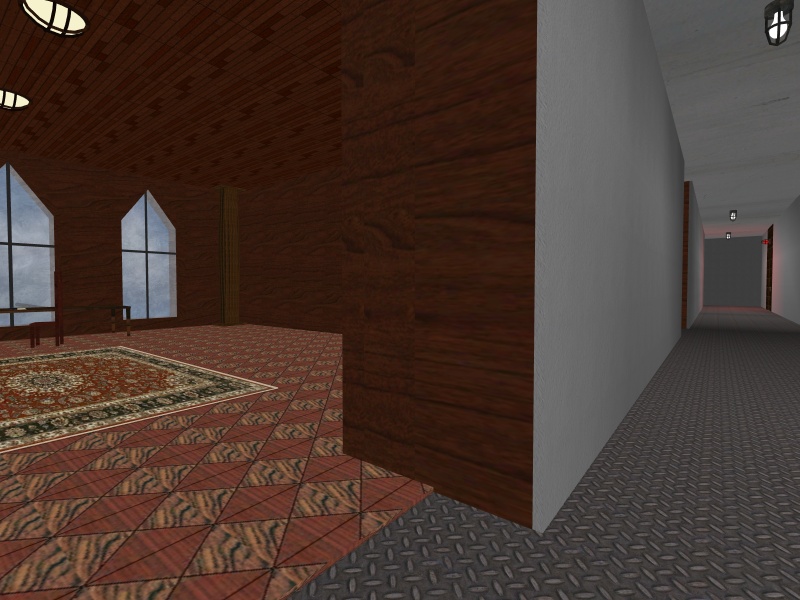 On the 24th expedition of the Fan Ages Touring Club we visited Jamey’s Ages: Vaiskor Area 2 and Terrati Lab, by J’anim Paedet, and Hayal by Corvus. See Minasunda’s video!


Vaiskor Area 2, released in November 2005, is an Age we already visited some time ago. We went back there to refresh our memories of the overarching storyline, that of a Guildmaster and his conflict with an organisation known as ISA, and more specifically with a person named Halfdan. A ‘Machine’ was taken by the Guildmaster from Vaiskor to …


Terrati Lab, released in December 2008, is a corridor with four rooms and a terrace. Journals in the two rooms on the left, written by the same Guildmaster from Vaiskor (“Book of the Vais”), give more details into Paedet’s story. Episodes of amnesia are mentioned. He is clearly not D’ni, and for a while worked for the ISA on another Age, Shemedaut.
The first room on the right has globes, and a (non-working) lift, that leads to a large transport vehicle and to a transparent dome. The second one is a medical lab of sorts; a journal at the bottom of another shaft mentions that workers developed an unknown virus while working in Vaiskor, and the plants too have started to die.
The terrace has two flowerbeds with some plants, and shows that the Terrati Lab indeed sits in the middle of a lake, in a vale somewhere in Vaiskor.


Hayal, released in January 2009, is a wacky fun Age, in the spirit of Pre Swaltu

The visitor links in a TARDIS, and is welcomed by Marvin the Android who offers a welcome journal, and free towels are available on a table.
The Age has various islands: a hut, a ringed planet with a rocket shuttle (click on the floor to launch it), an iceberg with a sword in the stone ice, a solid rainbow, two hot air balloon (one can be moved by clicking on the floor)…
A UFO flies from island to island, and if you are fast enough you can have a tour of the Age!

At the bottom of the well there is a corridor with two skeletons and another robot; walking at the end of the corridor, the visitor will start to float and swim, and will end next to the hovering carpet.

The golden symbols lead to a secret garden inside the planet, with a gazebo, a pond, and two carnivore insectivore plants, one of which is endlessly and in vain trying to eat a dragonfly on its nose.

Vaiskor being one of the early Ages, the basic idea behind it was "hey! we've got brand new tools let's use them to make the *laaargest* Age ever!".

And then once J'anim got over that phase he went for a more refined approach with a smaller, but richer area and added some story behind it; and now that started looking like a real Age.

I did the same mistake with Ahra Pahts. >_>

(I have no idea what's the actual size of the Age, but I do remember it being huge. I should try to import it in Blender to measure it)

Aloys wrote:Vaiskor being one of the early Ages, the basic idea behind it was "hey! we've got brand new tools let's use them to make the *laaargest* Age ever!".

Large Ages aren't impossible, but they take time and are a pain to correctly "fill" with details...

Vaiskor is a bit dull.

Vaiskor Area 2 is an interesting age. It is quite huge and if you create a marker quest inside it, you will come to a realization at one point: it is so vast that markers become untouchable unless of course you do a "local" quest.

Terrati Lab is very nice and an age that is almost completely solid. If you happen to find a "way out" of the makeshift lab through one of the open windows, you can basically run around the mountain tops and even go underwater. In fact, you will most likely head down underwater unless you know the sweet spot to jump to to be able to reach the mountain range. You can also cheat with the /jump function but personally I prefer avoiding that pesky cheat. Some locations underwater are treacherous as they look solid but are void thus my "almost completely solid" previously stated.

One thing that plague those ages is the size of objects / locations versus our avatars' size. It looks like it was built by and for giant creatures. And it lacks sound. But I'm fully aware it was not a feature present in early ages.

And as for Hayal, It is not my kind of age except for the nice raven in one house. I think it is the model that was used later on in that shard... ??? where you can find an additional relto page and choose between a pet cat or a pet raven.