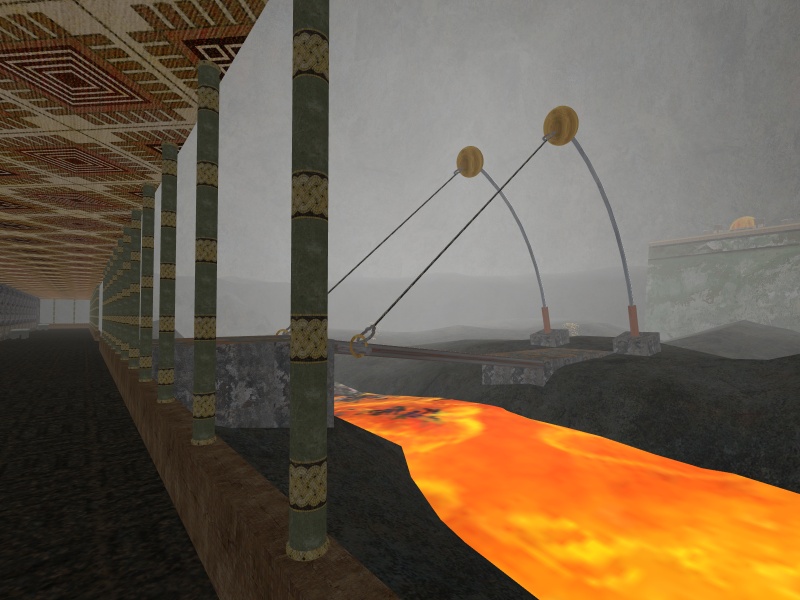 On the 29th expedition of the Fan Ages Touring Club we visited Oolbahnneea, first released by Wodan in April 2009. See Minasunda’s video!


The Age, immersed in fog, is divided in two by a river of lava. On one side is a closed temple with six columns, on top of a cubic structure; on the other, a pyramidal structure. Only one door can be opened in the latter, on the left side. At the end of a maze (keeping to the left side is quickest) is a room with paintings, a tomb, and 12 coloured buttons. Solving the 12-button puzzle will open the door to the left side of the pyramid.
Solving the 8-button one in the second maze will open a secret door with another journal. Further along, there is a second room with a large pool of quicksand and stepping stones; if you step on the wrong stone you will be sent back to Relto.
It is also possible to jump down the bridge and go behind the pyramid (from the left side). There is a code there that will be useful for the stepping stones. On the other side of the quicksand, a painting will show a location in the Age with the last code.

The puzzles are quite complex and thought out, they require a large amount of notes about any symbol or colour. All codes are sorted right-to-left, for a bit of added difficulty.

Show Spoiler
Some of the columns in the link-in area have symbols that are slightly different. The colours on these columns are the solutions for the 8- and 12-button puzzles (red-red-yellow-green and black-red-black-red, respectively).

Of course, you can’t see one of the symbols until you solved its puzzle!
Somewhere in the first maze there is a button on the wall, that will open the tomb in the first room.
The Walkthrough section in the gallery entry (click on Expand) has a few more images that can help you solve the puzzles.

Unfortunately, the Age is incomplete: the remaining two mazes, two room and central room are not accessible by normal means. So there is no real payoff, except a code for a future puzzle.

Oolbahnneea is quite an atmospheric location, with good-looking textures; one of my favourite Ages. If I had to find something to criticise, it would be the stepping stones that send the player to Relto, as I am not a fan of this type of ‘punishment’, and the invisible walls at the corners of the pyramids, which prevent the otherwise physically possible trick of jumping over the low walls.

Next time (September 13 at 11:00 KIT) we will finish our adventure in Oolbahnneea, then visit Torilacha by the Mystpedia.net folks. Until then!

I tried this age in my offline Uru CC. I was not able to workout the 12 and 8 button puzzles. In the start area I had no idea which was the start pillar for each puzzle. I created an Excel spreadsheet with pictures of each of the icons on the pillars. I was able to mark the different ones but that was as far as I got. Thanks for the spoiler pictures. I could not make out the pictures on those two icons. The path to the button was fairly simple.

Show Spoiler
I took a picture of the puzzle and then rotated it to the right to get the proper orientation.