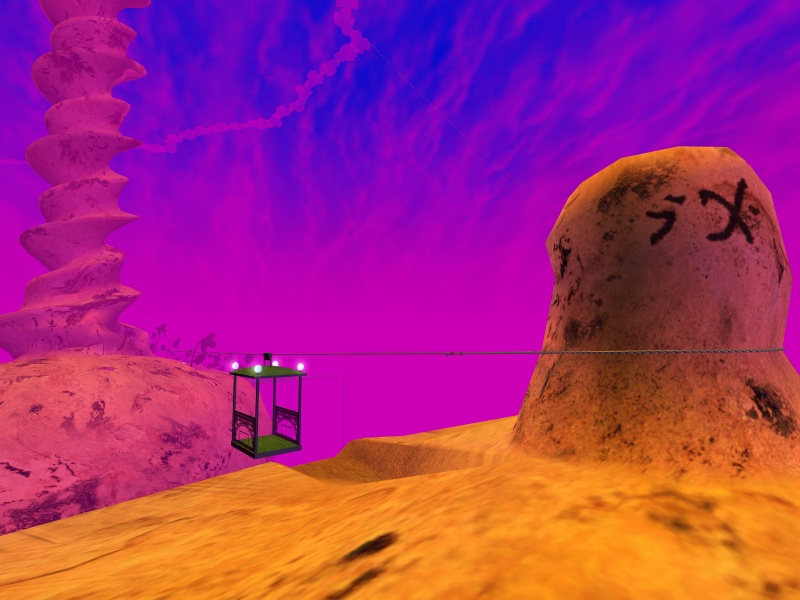 On the 31st expedition of the Fan Ages Touring Club we visited Rell-Too, a chain-letter Age first released by Jojon in April 2009. See Minasunda’s video!


Rell-Too is a psychedelic Age consisting of three corkscrew-like spires, and a pink sky with a day/night cycle. The link-in spire has a lift inside it, accessible from a hidden entrance (be sure to be in 3rd person view to see it); first though it is necessary to open an iris vent below it, which can be reached by climbing down a hard-to-see ladder.

The lift goes up to the top of the spire, which is connected to a second one by two paths of solid clouds

, the long one to the base, the short one to a hunter nest (bird-like animals that feed on creatures named rockbiters).

A cableway connects the first spire to the third. After a (long) ladder down a chamber can be found, with a combination code – which can be deduced by taking note of the symbols found in all three spires and inside the chamber itself – that opens a door to a … rather painful drop

(you really want to be in 3rd person view for this one) to the bottom of the spire: a beautiful lagoon with a reproduction of the harvester from Venalem. There is also a mysterous object on a table

As mentioned, this is a fascinating chain-letter experiment: started and coordinated by Jojon, it has contributions from Corvus, Perlenstern, Robert the rebuilder, Justintime9, Ametist, Junee, Rize, Core43, and DenDwaler. Each of them worked on it for some time, then pass the files to the next Writer.

It was (in theory still is) open to any and all contributions, and Writers could work more than once on it. The last contribution is from Ametist, in 2012. There is a dedicated website with the playable and Blender files for each iteration. Both because of the look and of the concept, it is another of my (admittedly many) favourite Ages.

I really like this age! Thanks for the beautiful description.

I may add that if you are into "History", that age is perfect in every way. You have 25 different versions of the age. I have a copy of each of them, I came into the scene when version 016 was available. Offline on your personal URU:CC install, you can change at will which version you want to play. You can see the evolution of the age.

There is also a mysterous object on a table

This mysterious object has a very subtle animation... You have to crank your volume to the max, go in first person view, make sure you have your eyes wide open and if you can get very near your screen, it will be better. Push the button and enjoy. Don't forget to thanks me afterward!