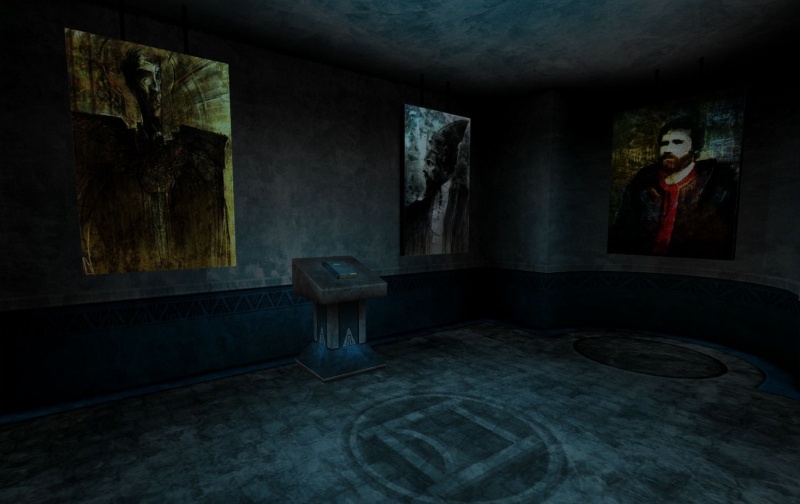 On the 33rd expedition of the Fan Ages Touring Club we visited Cass, Fahets, and Fehnir’s House, by Tweek, and City of Dimensions, by Filtik. See Minasunda’s video!


Cass, released in July 2009, is the second Age Written by Tweek. Originally it was called Tochoortahv (“Place of Learning” in D’ni) and was to be a location for studying the Art. After an act of vandalism, the Age was repurposed to house a museum of artifacts and information pertaining to D’ni and its Ages. The Age was then renamed after the street Tweek and his wife had their first home together.
The currently available area (probably the pre-fire version) is a small gallery with paintings of King Kerath, King Ahlsendar, Queen Lalen, and Grand Master Ri’neref. A vastly expanded version has been in the works for many years, with four wings and two floors.
The “TTP” on the curtain stands for “The Third Path”, a group started by Tweek as an alternative to the Great Tree, promoting the cooperation between Yeesha and the DRC for the betterment of D’ni as a whole.


Fahets, released in October 2009, is the first Age successfully Written by Tweek. At some point the Linking Book was misplaced and remained missing for a couple of years. In that time the Age had flooded from rain and the water needed to be pumped out before work could progress. The Age is relatively large, but visitors only have access to the basin area.


Fehnir’s House, released in July 2010, is located in the upper area of Ae’gura in the J’taeri district. Fehnir was a relatively high ranking member of the Guild of Archivists.
When the plague broke out Fehnir sent his friend and colleague, Jilen, ahead to make sure Fehnir’s family got to safety to Eder Ahryee. Fehnir never saw his family again, as he succumbed to the plague and refused to link to his family for fear of dooming them too.
In the aftermath of the Fall, A’gaeris and Veovis went from building to building, linking infected corpses into the Ages of D’ni spreading the contagion further. Eder Ahryee did not escape this seeding, as suggested by a smeared hand print upon the linking book. Fehnir’s wife and son were eventually infected and died. Jilen survived and remained in seclusion until he was found by Tweek and Steven Ross.
The music is Tim Larkin’s First Feast of the Maker. A vastly expanded version has been in the works for many years.


Since we finished early, and a few Ages have been released very recently, we then concluded the expedition in the City of Dimensions, originally released in June 2011 on the Open Cave shards. Mystler kindly agreed to have CoD and a handful more Ages released also on Deep Island.
CoD is an alternate version of Ae’gura with many modifications: including a boat ride, a lift to the Guild Hall, a renovated Kahlo Pub, a Museum with the lower floor accessible, a Library with a complete courtyard and the banners from Prologue.
If you are familiar with CoD from The Open Cave MOUL, keep in mind that the one from the PotS shard is an older version, most notably missing the dance floor (on the Guild Hall terrace) and the pet Relto page. On the other hand, personally I prefer this version of the restored Kahlo Pub to the more ‘modern’ look of the MOUL one. At the time of this writing, it is unlikely that the new addition will be added.

Next time (October 11 at 11:00 KIT) we will visit the other Ages from The Open Cave: Blackfisk, Gahlpo Vogehts, Peliania; if the bug will have been fixed by then, we will also visit Yinfara. Until then!