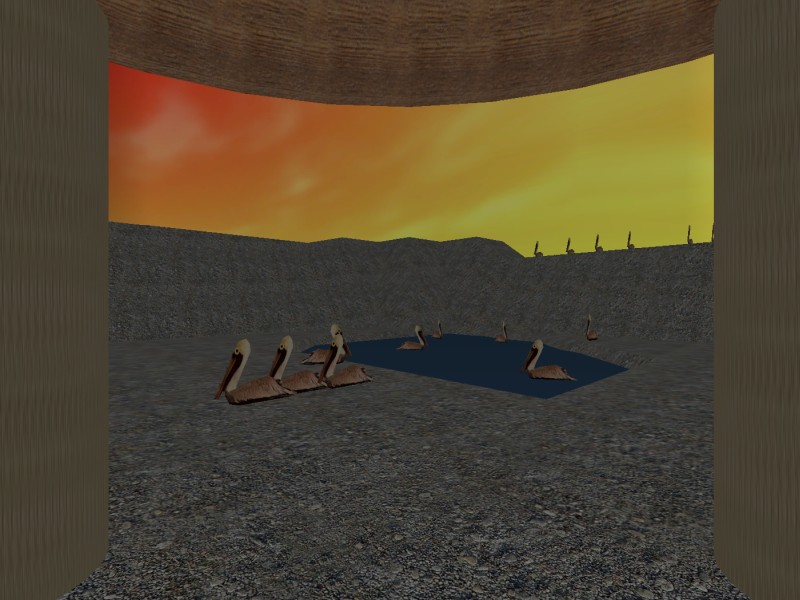 For the first part of the 34th expedition of the Fan Ages Touring Club we visited Blackfisk, Gahlpo Vogehts, and Peliania, originally released on Pelishard on September 2013, along with Dream by Denost, released on September 2012; for the second part, we did some training on the Gahreesen Wall. See Minasunda’s video!


Blackfisk is one of three Ages originally released on the Pelishard. I will not go into details about this infamous shard – a search in this forum will give you plenty of informations – but eventually the Pelishard closed, and until recently the only other shard to host them was the PotS version of The Open Cave. With TOC now in maintentance mode, it seemed opportune to give them a second home on Deep Island.
Blackfisk is a very basic Age, a long strip with a couple of octopodes and a non-clickable book. It somewhat resemble an Age by Denost, released a year before:

Dream is a long strip, with words appearing on the floor, an ASMR-like voice (not quite relaxing, though

), a floating clock, and a sad clown.
When we visited it, however, the Age was missing all the textures, looking like an endless black. A blind run to the end (about 5 min, in the direction opposite the link-in point) makes them appear, but the state doesn’t persists after logging out.

Gahlpo Vogehts is a circular chamber, with a garden and a small pond with pelicans. A “/jump 100” will land you above the floor, which is solid and has a tree planted upside down.

Peliania is an arena surronded by a stone wall, with a gazebo in the middle and … a lot of pelicans

some climbing the roof of the gazebo. The wall can be climbed and also has pelicans on it.


Inspired by the Cavern Tour held the day before this expedition, we then relocated to my instance of Gahreesen, for some Wall training ... because the Wall works in Deep Island!
Here is a quick guide to the control panel; note that it looks a bit different than the one on MOUL, notably it is missing the status lights, requiring verbal confirmation from the other team. I can watch a video guide here.

The players then move to the mainteiner suit dispenser in the nearby room, and step on the Wall. The winner is the first to reach the blinking line at the top, corresponding to the red button ①. As far as I can tell, someone has to reach the top to allow resetting the panel.
No real scoring could be taken this time, since it was too funny to actually climb the mighty Wall, but who knows in the future

Next time (October 18 at 11:00 KIT) we will visit some assorted Ages from 2010: Ahreeuhtahv by Cherish, Spiro by Jman, Ria by Rich. If the bug will have been fixed by then, may also be able to visit Yinfara. Until then!