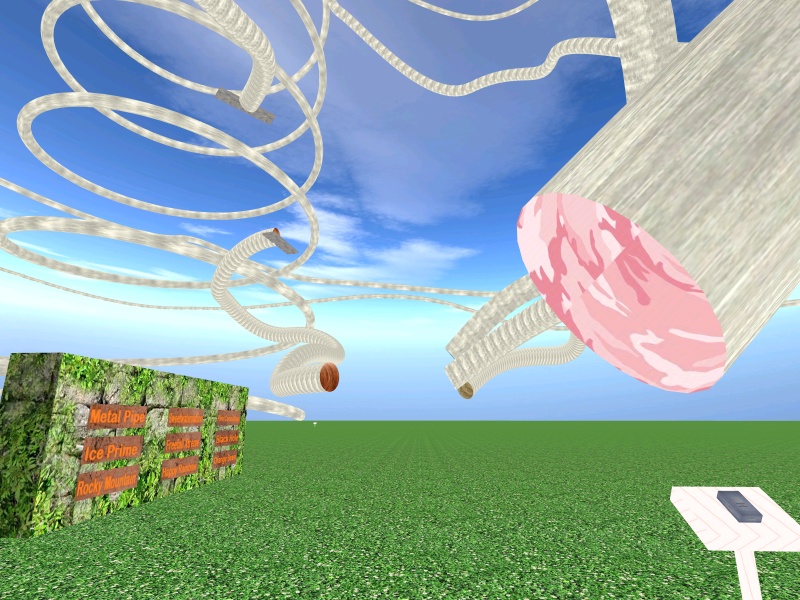 On the 38th expedition of the Fan Ages Touring Club we visited Huiiiiiiiiiii by Christopher and Ria by Rich. See Minasunda’s video!


Huiiiiiiiiiii (yes, 11 ‘i’), first released in July 2010, is a set of three playground ages, one of which acts as the ‘Nexus’ for the other two. However, for a long time Hui Lab was not available on DI.
The Nexus is a large garden with a small lake with pelicans, a table with a box of cookies (a bit stale at this point, but the supply is infinite!), and two podia with books to Huiiiiiiiiiii itself and to Hui Lab.

Huiiiiiiiiiii is a plane with a series of slippery roller coaster tunnels: you just need to run a bit into them to start the ride. It goes without saying that you may want to avoid playing here if you have photosensitive epilepsy.
A billboard with buttons will teleport you to the start of each tunnel. Some are short, some are long; some are slow, some are fast. A journal gives some stats about the tunnels. One (‘TOC Nightmare Slide’) is missing as it was specific to that shard.

Hui Lab has three mazes:
Unfortunately, there seems to be bugs when multiple people are present, like most people are shrunk when someone push the button, people are linked around when someone touches the spawning books, etc.


Ria, first released in September 2010, is a riverside Age with a lookout on one side and a lighthouse on the other side of the river, and there are a few hills around.
The age has a secret, though. By using /spawn repeatedly, the visitor will be linked to three other (less detailed) ‘planets’, which for convenience I call Earth (the link in area), Moon, Mars and Neptune, because of the textures that one can see in 3rd person while the camera flies from one sphere to the other. Each planet is a basic hilly landscape; Neptune looks a bit like a location from Obduction.

The planets were probably intended to be reachable through some mean, but the author never added it, so the additional areas can be missed by visitors unaware of them.

Next time (November 15 at 11:00 KIT) we will visit the D’ni Location (Creation) Contest ages, high quality locations in the Cavern. Until then!