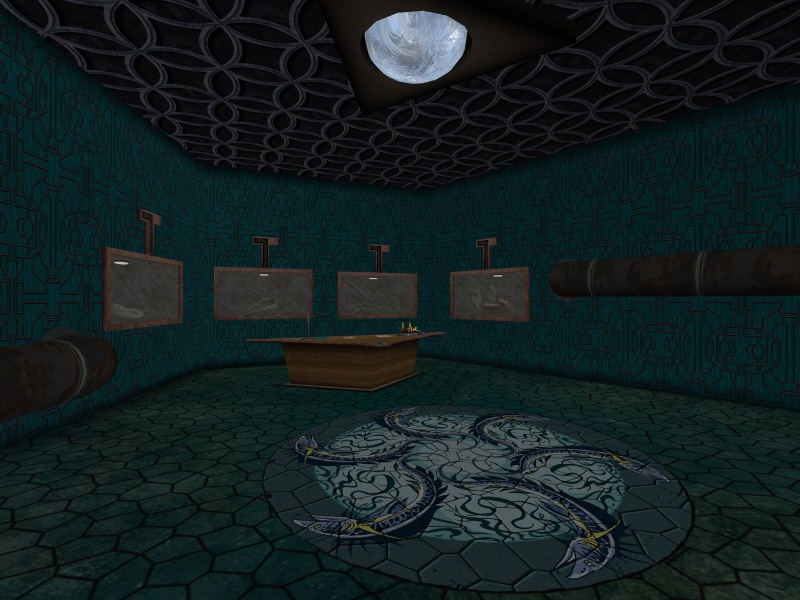 
DRA Office, released in September 2010 (but actually made after Adrael itself), is the starting area for the Adrael adventure. DRA is the D’ni Research Association, a European equivalent of the DRC, with a more archaeological approach to restoration: their view is that works of art, machineries and other artifacts should be preserved in their original condition, even if incomplete.

The office is actually a Nexus for various areas in Adrael, a D’ni age with four stars, one of which has a spiral around it. There are three rooms: the link-in point has a desk with notes and journals; one has stands with linking books on it, and a window looking at a large planet; the third one has three monitors, one of which is usable and has three videos – a very rare feature among fan ages – with clues for the story.

Three books are available in the Nexus: one links to a room in the city of Dormah, long since abandoned. As the journal mentions, the age has since dried up, so the place is a bit different from the video. You can actually see the city through a window!
Another book links to an abandoned mining location north of Dormah, with three main areas: a cave with a dragon-looking fossil, a narrow passage with a broken pipe (note the D’ni numbers and the emblems on it), and a larger open area with a digging machine, and a giant stone head. There is a model of the machine in the office, and the head is shaped after Lyllus’.

The third book links to a cliff with a dried tree, west of the mine. This is where the puzzle actually begins: a DRA member, Irena Stromberg, has gone missing after a vision of a ‘ghost’ with glowing eyes (filmed in one of the videos), and rescue attempts so far failed to even locate her.


The Adrael project I think is one of the most intriguing (and complex) fan stories in the Uru community, and one that is still going on. A complete overhaul of the office is planned, along with two more ages: Aaronia and Amahura.