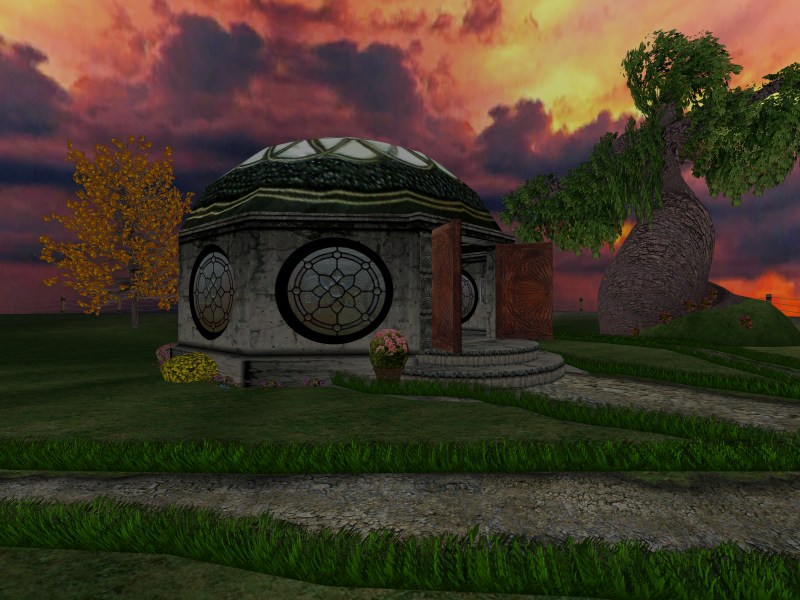 
R’Oshanhnin Korvahkhn, first released on November 2011, starts as a plateau somewhat reminiscent of Relto, or Rowan Green from Crowthistle. But there is more below the surface: a journal, which appears to be written by Atrus, asks the explorers to recover a missing linking book; it also warns to keep an eye for Journey Cloths and animal figures.

Other journals are scattered across the age, written by four survivors from Rahsoo B’ahrotan (of which R’Oshanhnin is a sort of sequel), who left clues. After a series of puzzles that will make you feel like Indiana Jones (why did it have to be snakes?), with a stopover at a sort of space station, you will learn of the final fate of the survivors. (None of them survived)

Solutions Show Spoiler
There are 8 Journey Cloths (green, with the tree symbol):

The hand symbol on a tree raises a ladder. To open the door at the end of the upper path, press #4; the other numbers will make planks fall out.

A door with the Falling Man leads to a rotating bridge. Time to jump! In the Greek temple, touching the snake will lock you inside a column.

The buttons on the panel next to the spaceship flip the color of themselves and the next two buttons; the easiest way to solve it is to press them in sequence: 1, 2, 3, 4, . . .
Get in the rocket quickly or it will leave without you; when it stops also get off quickly.

At the end of a long, twisting corridor there is a button; it will not work until you have touched all 8 cloths.

As expected from a work to which Wamduskasapa contributed, there is a strong presence of Native American culture in the stories, the clothing and the items in the age. There is even a cookbook in the starting area!
Overall R’Oshanhnin is a good age all-around, large, with nice models and textures, a solid set of puzzles of different types, an in-depth backstory, a conclusive ending inspired by Riven, and varied music.

Notably, the age rewards a Relto page for completing the puzzles; in a group, it appears that everyone gets the page when someone touches the page.

The name is meant to mean “the lost linking book” in D’ni, although the spelling is a bit garbled (properly it should be “r’oshahnin korvahkh”, or perhaps “r’korvahkh oshahnin”). In another place there is an inscription that reads “ril maloehtah meh kamto komahlaheht” (“we must not forget from where we came”), although the text is written incorrectly.

Next time (January 17 at 11:00 KIT) we will visit a few ages by Ametist and Corvus: Hallway, Matte, ReGahlpo. Until then!

Thanks Korovev for the spoiler

and as always for leading this tours! Without the solution I could not have gotten the Relto page in the end. I went through the age today. and read all the Journals very thoroughly. I found clues to the last puzzle and the spaceship puzzle - or 'The War Canoe of the Thunderbird'. But not to the puzzle with the Narayan symbols. Have I missed something or does one have to know the symbols beforehand?

During the tour I had so much trouble with the rotating bridge, I kept jumping beside and reltoed out. I hate when that happen. If the avatar falls down somewhere it should be a way to get back. I would like to have the choice to use my relto-book or not. If not falling into boiling lava of course, then the panic link is great

. Anyway, my trouble was the mouse, in certain areas in the age, especially after clicking a hotspot, I just turned around instead of going forward when clicking left mouse button. That meant it was almost impossible to get on the rotating bridge properly. I fixed that particular problem by ticking of 'go where I click' in the game settings - took me a while to figure that out though

. So today the rotating bridge was easy, but the elevator was still a problem. I kept falling through many, many times. The subworld and its colliders would really need some fixing...