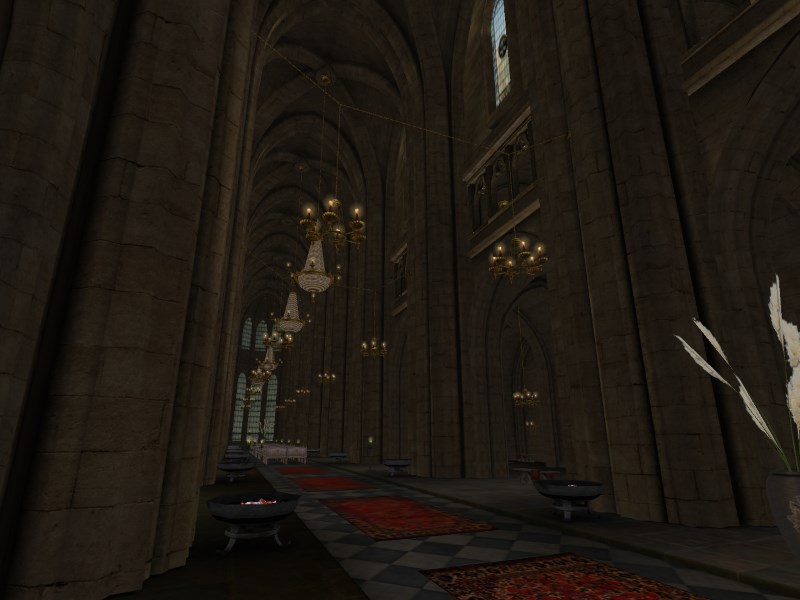 On the 66th expedition of the Fan Ages Touring Club we returned to The Cathedral by DenDwaler. See Minasunda’s video, and DenDwaler’s own trailer!

The Cathedral was the Fan Ages Touring Club’s very first expedition, but there were four of us, and the format was still a work in progress, so it was time to revisit the age properly.
Unfortunately we had frequent crashes, but it appears to be a multiplay issue, the age is fine offline.


Released in February 2016, The Cathedral is, at first sight, exactly what the name implies. But further exploration will reveal a few secrets hidden below the surface

The story is that DenDwaler accidentally found a bahro stone in the Kahlo pub; he restored the upper part, which was in ruin, and later found the hidden area.

As I previously wrote, I think it’s a very well made age, with excellent texturing and a good puzzle (at least if you enjoy musical ones). With some slight retouches, and replacing a certain character that appears at some points, it would be fun to see it on MOUL. Here you can see a remake of the fountain in Unity.

If you need a walkthough, there is an explanation of the main puzzle in the previous thread, or a complete video by Minasunda.

Next time (May 30 at 11:00 KIT) we will visit Ahreesen Melin by Semjay; it is a recently-released age, so we will not go too in depth about the puzzle

Damn, wish I could have come along. Unfortunately I had to finish some real-life work for the next day

Cathedral is really a cool Age, with lots of good looking areas. My only pet peeve is it lacks echoing footsteps, which would really add to the immersion. (I recently re-enabled EAX on my Uru install, and it sounds insanely good in Ages that support it.)