Announcements and discussion regarding any projects related to Cyan Worlds' Plasma Engine including (but not limited to) CyanWorlds.com Engine, Drizzle, OfflineKI, PyPRP, and libHSPlasma.
Post a reply
74 posts • Page 7 of 8 • 1 ... 4, 5, 6, 7, 8

Cool, thanks for the input! This is probably one of the more annoying changes to test since requires at least two players running an updated client. I appreciate having someone to look over everything

I left some comments on the git commits themselves--everything looks pretty good, except for some minor things.

This all looks awesome. You guys are amazing. Thanks again.

Christian Walther wrote:A note that may or may not be relevant: Is this new ignore function the only use of disabling drawing of an avatar? If not, and there is another feature that disables drawing of an avatar, I could now subvert that by ignoring and unignoring the player. What about CCR invisibility, does that work differently?

Tsar Hoikas wrote:The ignore function is the only way that I know of to disable the drawing of an avatar, unless you expose the python API through the console or run some custom code. The CCR invisibility uses a custom plMessage, and I'm not even sure if it will make the player invisible anymore. There are some claims that Cyan broke it after the "NotABeast" incident. I opted to not add another creatable as I felt this would decrease the chances of the changes getting merged back to Cyan.

You know what? It occurs to me I was wrong in taking your (technically correct) answer as confirmation that there is no problem.

There are in fact two independent reasons for disabling drawing of an avatar. We just added them. One is ignoring that player, the other is being ignored by that player when they have /shun on.

Let’s suppose that player X ignores me and has /shun on, so I can’t see them when they are in an age with me. Now I do /ignore X, /unignore X. Guess what happens? X becomes visible to me, I have subverted their /shun.

I can try to come up with a fix for that over the weekend, unless you or someone else who is already in their christmas break beats me to it. The two reasons for invisibility must be tracked separately and drawing only re-enabled when both are gone. The question is whether to do that on the xKI.py side or on the C++ side (as it is already done for avatar physics).

I came to the conclusion that doing it on the C++ side would require extending plEnableMsg, a can of worms that I’d rather not open right now, so I did it on the Python side.

Just because I was in the mood for some crazy diagramming, here’s the plan how to test it: 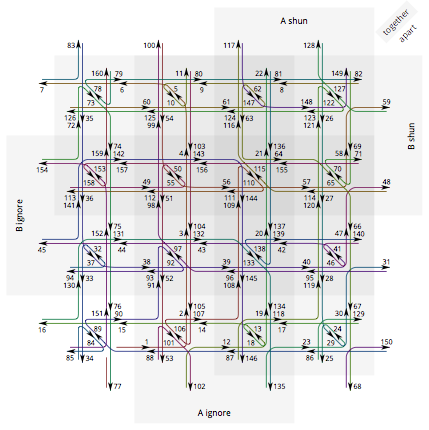 (There are 32 possible states of the five conditions “A ignores B”, “A has /shun on”, “B ignores A”, “B has /shun on”, and “A and B are together in the same age”. The goal is to try every possible transition between two states and see if the right thing happens, confirming that the result only depends on the current state and not on how one got there. The graph of states and transitions is a five-dimensional hypercube. A path through all 32 states (vertices) is required that traverses every transition (edge) at least once back and forth, with as little repetition as possible. This is one of many solutions with no repetition at all – every transition done exactly once. At 160 steps, still at the edge of feasibility…)

Things relating to Build 905 and the new shard have doubtless been eating your time, but I was wondering if we could have a quick status update on this. Any news on the testing front? And: would I be wrong in imagining that if we get to a version that jumps through all of Christian's 160 variously coloured hoops and is still singing Bonny Mary when it comes out, we could put it into Gehn immediately?

Gahlen wrote:Things relating to Build 905 and the new shard have doubtless been eating your time, but I was wondering if we could have a quick status update on this. Any news on the testing front? And: would I be wrong in imagining that if we get to a version that jumps through all of Christian's 160 variously coloured hoops and is still singing Bonny Mary when it comes out, we could put it into Gehn immediately?

Actually, I think one of the things that stalled here is that it wasn't really possible to test all those scenarios very thoroughly. I'll open a discussion about getting this enabled in the Gehn client as a testing ground.
"And one day I woke to find the future held no place for me. I was unwanted in a world, that with my hands I'd helped to build. Where once was honesty and pride, I now stand broken and alone."

Loose ends as far as my unsolicited contributions are concerned:

Paradox wrote:I'll open a discussion about getting this enabled in the Gehn client as a testing ground.

That would be great, thankyou.

Christian Walther wrote:whether my last comment clears it up

It does to my mind, and I agree with you that treating text and voice the same way is highly desirable.

Just in general, I currently believe that shards like Gehn are the true future of Uru. The more stuff like this we (or rather, you

) can build in that answers to acutely felt needs in the community right at the moment, the more people we'll see here, since it'll become rapidly clear that Gehn can offer a genuinely safer and better playing environment.

Tsar Hoikas wrote:Pfffft. Why solicit donations for a 15 minute change

? I'll have it coded sometime this week (whenever my crazy schedule permits...).

I would really appreciate seeing this function in game. I have had terrible advances made to me and my daughters in game...things that would be criminal in rl. Being someone who has had to deal with the effects of sexual assalt in her immidiate circle it is a feature I would be thrilled to see in place....like yesterday...

luv angelmyst
The aura that remains when I leave the Cavern....visible only to those who choose to tread where the Bahro have trod.