Announcements and discussion regarding the Gehn CWE Shard.

Ok thanks for the explaining. This is the best I can do for a screen shot of the area. Right where the avatar is standing is where it briefly sticks. It is in the Great Zero after you link in, go down the big stairway, past the "GPS machine" and on the first stairs as you start to go up towards the back (happens on both sides). The only reason I noticed it is because I was doing the marker missions. Happened in full screen and windowed mode. Not that big of a deal and does not really effect game play. It doesn't happen if you jump or walk, only when running. 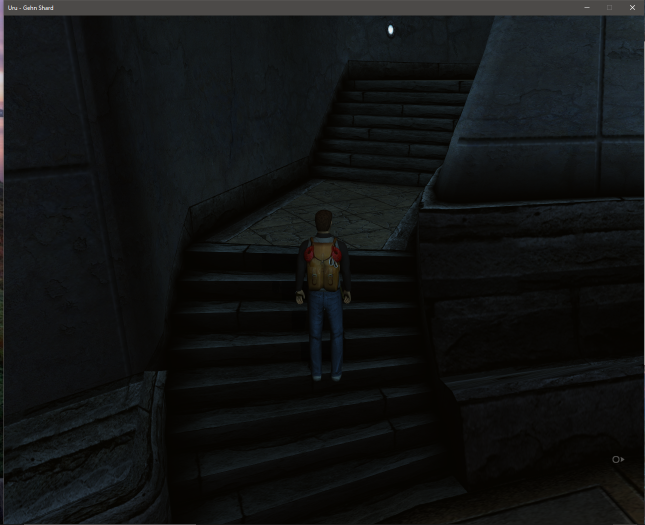 Hi, Jeffrey, I've been testing this on my old win 7 laptop vs my higher-spec win 8.1 laptop. If anything the sticking is worse on the higher-spec one. I have been sticking on the bottom step as well as the one higher up (as per your picture), when I use the higher-spec laptop.

It sounds as though your sticking resolves itself after a while - in my case, it doesn't, the avvie has to be jumped - or occasionally moved along the step - to break free.

I can't manage to get stuck there at all -- and I would consider my system to be relatively high spec (i7-4770K, GTX 970, 16gb RAM). I did take a look at how colliders are built and they look fine.

Ok thanks all for looking into it. My system specs just FYI (Laptop Intel Core i7-4710HQ 2.5 GHz, 16GB RAM, Intel Graphics HD4600, Windows 10) (Desktop AMD Phenom II X6 1045T 2.7GHz, 8GB RAM, AMD Radeon HD6450, Windows 10). All drivers are up to date. It really doesn't effect game play too much, just wondered if anyone else was experiencing it. Yes for me it does resolve itself after a short time, the avatar is moving, just not going up smoothly. It is strange that it only seems to effect the running. Never the walk or jump.

Another thing I noticed is that is seems when the KI is up, the Age Players, Neighbors and Buddies heading at the left are not there. When doing the marker calibration missions, after I pick up a marker the headings pop up briefly then disappear. I don't know if this is a setting unique to Gehn or not. In MOULa, those headings are always there after you pull up the KI

Interestingly, trying my high-spec laptop this morning (UK time), with no-one else using the wifi (and with lighter internet traffic to the server too I assume, with the US asleep) I wasn't getting the sticking. I still got sticking on the older laptop.

Jeffrey, re the ki display, what chat fade settings are you using? Not sure if that's linked to what you're experiencing, but I always max out the fade, as it otherwise seems to disappear far too quickly.

Yes I have it set to max. The chat stays, but the Age Players, Neighbors and Buddies menu on the left is not there or shows up then disappears quickly. Also most of the time if I type something, I don't see what I am typing until I hit enter, then it shows in the chat window.

hmm, disappearing chat that you can't see as you type reminds me of a thread I started a couple of years back

I've not noticed the problem since then, but then again I don't tend to do much chatting when I'm testing

You'll see that Adam said this happened on MOULa too, though I've not noticed it there.

I tried to rotate Ahnonay today for my newest avvie, using two laptops and two accounts, but it wouldn't work

The first odd thing I noticed was that, for the second player to arrive on the island - ie not the "owner" - some of the quabs were spawning below the surface of the island - I took some ki pics of just eyes showing; other quabs seemed invisible until the avvie approached, at which point they suddenly appeared. I remember a previous problem with invisible quabs but not previously quabs living in the rock itself

The second thing I discovered, which was more important, was that when one of the players left the island, their marker remained, so it was impossible for the player who stayed behind to make the rotation happen. I seem to remember this meant a problem with pressure plates, but I thought it had been fixed?

So sorry to bring up Ahnonay problems - I know how popular they are!

I see something here about Ahnoying things, but I'm going to hold off on the Ahnoying stuff until the weekend

Was on Gehn tonight, looks like the KI chat, and Age Players/Buddies/Neighbors list was working as normal. Only issues was those darn stairs in the Great Zero....lol