After your post I tried just about every combination of any and all the various subworld settings, trying to get something partially working like yours. I couldn't get anything. So after your post clarifying to *NOT* make the collidable surface use the dynamic option, I turned that off.
I'm not sure what else I touched or what exactly happened, but somehow the collision was suddenly working. I was confused, not know what was responsible for this sorcery, so I made another platform trying to duplicate the success and see if I could figure out what caused it.

This second subworld platform was NOT working. I was completely baffled. I made sure everything was essentially the same between the two (same hierarchy relationships, on it's own prp page, all the same modifiers and settings for those modifiers).
The only difference I could see between them was their position. The first subworld platform was at the world origin. The second was naturally placed next to it.
So I thought to swap their positions. And now the first platform stopped working, and the second platform *was* working. Hmm...

I think it was the combination of having the platform exactly at the world origin (I've moved it around a bit during prior attempts to animate it), and the right settings (dynamic avatar) that got the collision working for me in the first place.

Come to discover that when moving one of these subworlds away from the world origin, the visual component of the collidable object was where it's supposed to be, but the actual collision component ends up offset.
Here is a visualization of what this offset looks like:

This is entirely in blender, not Uru. I'm not actually exporting any animations to Uru right now (one thing at a time). Just wanted to visually demonstrate what's happening.
(Besides, I still have that nagging problem where exporting an animated subworld to Uru still causes the children of that subworld to end up under the world at -2000 units (for me anyways).)

Both platforms begin the animation at the world origin. as the platform is placed farther from the origin, the collider becomes ever more distant from it.
This offset is twice the distance the subworld is away from the world origin. So I could predict where the collider would be based on where I moved the platform to.
What is also strange here is that the entry region's collision component coincides with the visual component (it's where it should be). So I needed to add an extra entry region just to get onto the offset collider. 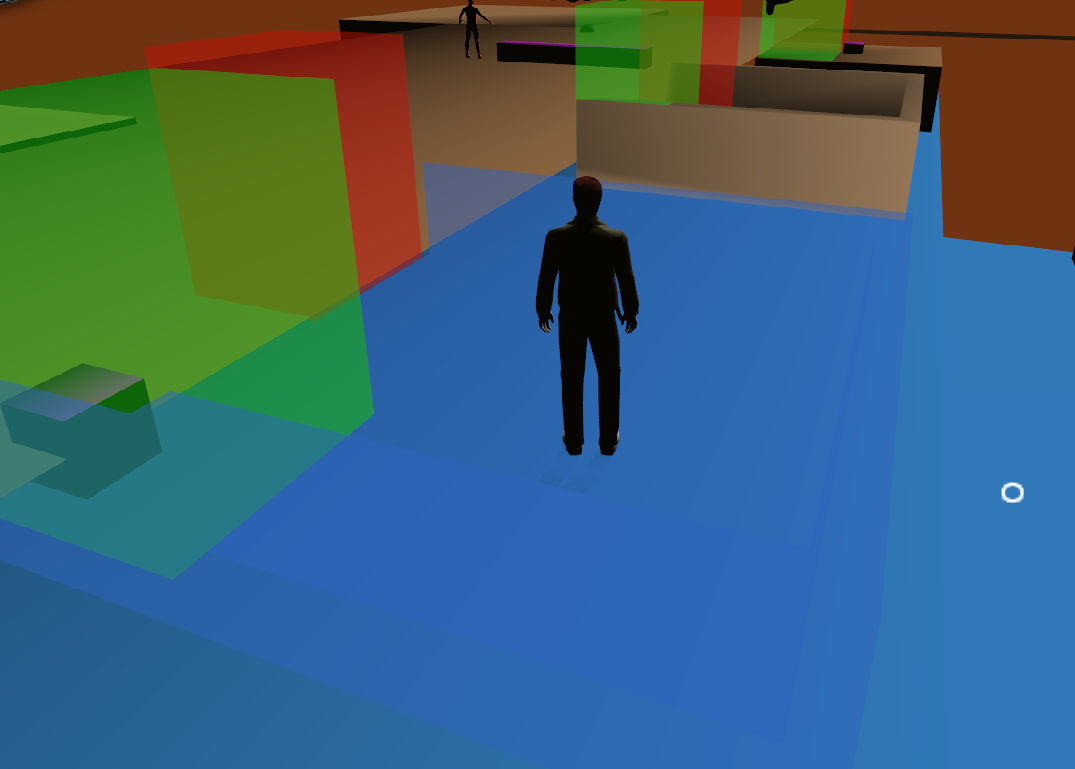 This is the way the scene looks from Uru (looking from the opposite side, sorry, hard get everything in frame with the camera following the avatar for a shot like this).
The (very) transparent blue mesh is where the collider ends up. This blue mesh has no collision, it's only there to visualize.

At least now I can walk on to a platform in a subworld! Assuming the subworld is at the world origin and it not animated (kinda pointless). And I can't get the exit regions to work either.

OK...after checking your blend file I realise that you are building for tPotS (CC).

My settings in the previous screenshot are for MOULa.

I guess subworlds work differently in the two different engines ...
when it comes to Age creation ... "DOH" seems to be my middle name...

How do you make an age for MOULa anyways?

Rather, I mean, how do you test the age as you building it? Is there a way around needing to send your files to a shard like Destiny? Something you can do on your local machine?
I would like to target and use MOULa but I feel like the online element will (significantly) slow down iteration time and progress when I'm building.

I use Destiny.
You test your Age in exactly the same way as with CC ... so creating your Age is almost identical.
It also means you can invite someone to test any multiplayer aspects of your Age and check they work with other players on MOULa. All the details are on the Destiny forum.

I was also confused at the start that I would need to send them a new .age file with every change in blender but you don't.
If you are using a sdl file or you change the settings in your .age file then yes, they DO have to be updated on Destiny, but texturing, modelling, logic nodes ... In fact anything that is NOT stored in the sdl or your .age files can be adjusted, added, removed and you can check it immediately by launching the Destiny client, just as you would with CC. I have only sent ONE copy of my .age file to Destiny, when it was just a simple plane with 3 avatar lights. I probably do 30-40 changes to my blend file every day ... and can see the results immediately on my local machine.

The guy that runs Destiny is also around on Discord almost every day and is super helpful.
when it comes to Age creation ... "DOH" seems to be my middle name...

boblishman wrote:I use Destiny.
[...]
If you are using a sdl file or you change the settings in your .age file then yes, they DO have to be updated on Destiny, but texturing, modelling, logic nodes ...

I am USELESS with .sdl files.

I DO know that you must always ADD to them and never delete anything that is already in them....but that's about all.
The wiki page seems to tell you what to do ...

Once you've updated your SDL file you must send it to Destiny and wait for confirmation that it has been updated on their server before visiting.
This is usually within 24-48 hours.
when it comes to Age creation ... "DOH" seems to be my middle name...

Okay, so now that I'm finally on Destiny, I've been playing with subworlds again.

Tsar Hoikas wrote:For now, if you're wanting to do something "simple" with a linearly displaced platform, I know that the "dynamic avatar" option works correctly in CWE (but PotS does not support that at all).

I have now been able to duplicate this with MOUL. So 'dynamic avatar' is adequate for platforms moving in a lateral fashion (either sideways, or vertically, like a standard elevator). Although for sideways movement, it was necessary to set the friction up to 10. If the friction is too low, the avatar doesn't move with the collider. Just as boblishman mentioned:

boblishman wrote:OK...further testing... and YES, I can get collision working if I set the Subworld Empty to Dynamic and also set the subworld collision object to Dynamic. However, I had to set the friction on the collider to 10 in order for him to move around WITH collider, which in my case is a rotation cylinder.
....However, whilst the avatar does move with the rotation collision object, he himself always faces in the same direction!

I have likewise been able to duplicate bob's scenario (a rotating platform, the avatar moves around the pivot point, but always faces the same direction)

As Hoikas mentioned, 'Dynamic Avatar' isn't ideal for situations where you need rotation.

Worth pointing out that the "under the world" problem I mentioned earlier in the thread does not occur in MOUL. It's only relevant to PoTS/CC versions of the game.


However, I have also been able to confirm that the offset problem I also posted about earlier in this thread is also occuring in MOUL (for subworlds using the 'separate world' option)

If the object is not animated, the position it has relative to the world origin is the basis of the offset. (collider is twice the distance from the origin as the actual object is). Same as when exported to PoTS.

Exporting animated subworlds to MOUL actually works without interference ('under the world' nonsense). But still has the offset problem.

Basically if you use the 'separate world' option, unless you have your subworld positioned at the world origin, you will always fall through the floor trying to get onto it, making it seem that the collision is not working (it is working, but the collider is not where you expect it to be).

[Edit: I went back and revisited the 'empty transform' problem I posted about earlier in the thread, in case it was related. It seems that I was not marking the empties as Plasma objects, which would explain the entire problem. I still cannot fathom how I missed something so painfully simple, and I'm mildly worried about myself

TL;DR
In MOUL ' dynamic avatar' will work for a regular elevator (set friction high).
For anything with rotation, you need 'separate world'.
When exporting using 'separate world', the subworld's collider will be offset anywhere other than the world origin. (making collision appear broken)
If using PoTS, maybe just give up

JulyForToday wrote:
[Edit: I went back and revisited the 'empty transform' problem I posted about earlier in the thread, in case it was related. It seems that I was not marking the empties as Plasma objects, which would explain the entire problem. I still cannot fathom how I missed something so painfully simple, and I'm mildly worried about myself

Forgetting the Plasma Object setting has caused me SO may headaches ...

I laughed way too hard at that..

FYI, if you right click the checkbox, there is an option in the context menu called "Copy To Selected". Huge time saver if you want to turn on/turn off "Plasma Object" for a bunch of different objects at once.