Great to see that you won't allow yourself to be kept down! :)

I must say first, that Aquh is teaching me that I, for one, am probably being way, way too fanatic with polygon count reduction, because I get no lag whatsoever in this age, despite the massive amount of geometry detail on some parts (this is with a NVidia GeForce 8800 GTS).

A few tiny details, which I noticed, at a cursory glance and which may or may not show up with your setup:

The roof surface of the gazebo shows up single-sided, just like on your screenshots, so that is probably not down to your graphics adapter.
I have varied experiences with two-sided surfaces myself - sometimes they work, sometimes I have to make an opposite normal duplicate. Haven't managed to spot a pattern...

Looks like there is a duplicate of a surface in one of the wallsections of the bridge (third from the end on the right, facing pagoda island), with the two copies fighting it out over Z domination. :7

There are some strange "half-polygons" covering the windows on the top floor of the pagoda.

Looks beautiful otherwise - I take it the solid diagonal bit on the balustrades is a design feature?


Yes, by the way; I suppose we might have guessed that the granite texture is a placeholder, seeing the prominent watermarking. :)


Personally I'd love to see this age as a Eder Delin-like setting rather than the tiny-islands-in-a-vast-sea formula -- either enclosed like Delin, or perched high on a mountainside like Eder Licinius.


(I'm afraid that I haven't even loaded Yaeviev into Blender since last we spoke about it, yonks ago, by the way - sorry, I'm such a lazy bastard. :/ )

I didn't notice the Gazebo roof wasn't double sided. I know there is supposed to be a way to have a texture appear on both sides. For the life of me though I can't remember how. Can someone remind me.

Dang there is a watermark on that image!!! I didn't even notice that when I first got it. Shoot That is going to be a pain, and I really liked that texture.

Edit: BTW Jojon you need to worry about poly count. The reason I have such intricate details is cause those models have high poly counts. I have to go alot of times and painstakingly divide them up to the point that pyprp won't complain.
MOUL Again Ki #'s
I.Brattin - 777796
Jayden Halliwell (IC Explorer) - 54404

In edit mode hit F9, there is a panel "texture face", and the 2nd button in the 2nd row named "Twoside" is what you are lookung for. 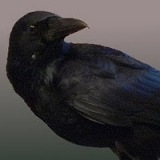 Corvus tried what you said, and for some odd reason its not working. I go in - edit, F9, twoside - and the texture isn't showing on the reverse.

Can this go on UAM now?

Believe it or not vers 0.3 is close at hand.

Here is whats new. The Tall building has been removed for the time being. I know you all are not getting lag from it but I am, and its not because of the shadbuf its my lowbie card, which makes it hard to do things.

I took Jojon's suggestion and removed island two, and the volcano (there now in Chamassa). I added cliffs around the edges of what used to be island One, which is now the only island. Cliffs really isn't the right word I don't think. More like Volcano because if you look at it from high above with flymode it looks like a Volcano.

I have also added the memorial markers. 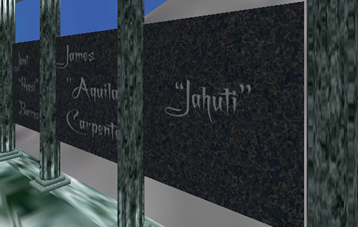 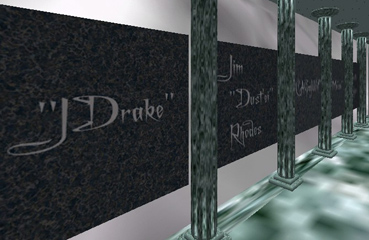 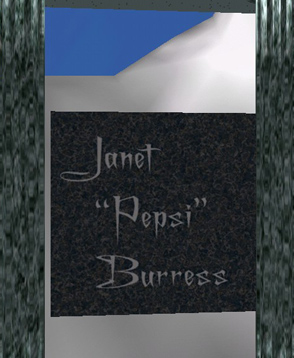 You seem to be churning out complex builings like so much butter. :)

I'd like to clarify that when I made my EderDelin statement, it was really the mood of the age I had in mind - love the serene beauty of its tranquile autumn/winter setting and thought something like it would fit your creations like a glove. :)
Still room for the bridge, even without islands - a stream or chasm would fit the bill perfectly.

Now that would be an interesting idea, Jojon. I had been wondering what to do with the area between the gazebo and the temple. It's fairly good sized now. I think cutting a little out of that area to form a small creek with a bridge over it would be a nice idea.

Thanks for the suggestion I may go ahead and do it.

I wouldn't say that. I haven't churned out a new model since the weekend. And I don't expect to churn anything else out the rest of this week, at least not in buildings. I might add some trees, right now though no buildings are being worked on or are planned to be worked on.
MOUL Again Ki #'s
I.Brattin - 777796
Jayden Halliwell (IC Explorer) - 54404