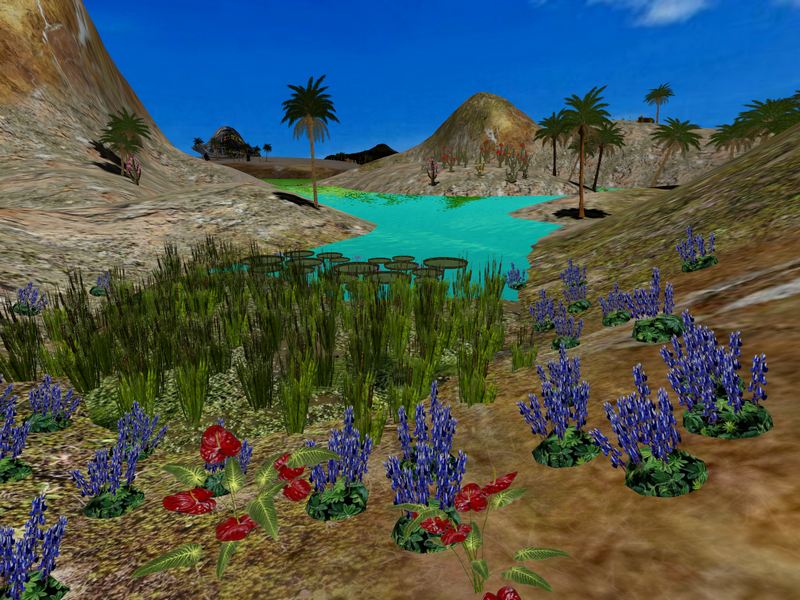 On the 42nd expedition of the Fan Ages Touring Club we visited Eder Taygahn and Yedahna by Zuri, and Turtle Isle by DenDwaler. See Minasunda’s video!
Unfortunately most of the group crashed repeatedly while attempting at linking to Eder Taygahn, so we only gave it a quick look. In Turtle Isle, towards the end of the visit I started crashing.


Eder Taygahn, released in December 2010, is a garden island with twisting trees immersed in a thick yellow fog. The link-in point is a (unmovable) boat.
The age is so far the only release in the Eder Bahreltahn project by Zuri and Stranger, a group of ages with a complex background story about a D’ni known as Ash’taroth, member of a secret order known as the “Children Of Yahvo”, led by a mysterious Writer and prophet named Shetehntahn.
At the time of the Fall, they escaped to the age of Tar’sahl, where Shetehntahn manages to uncover the descriptive book of the age of Eder Bahrehltahn, considered lost.


Yedahna, released in February 2011, is a quiet sort of temple in a steep valley. A tall statue of a figure holdiing a ball watches over a small pool and a gazebo, lighted in red and purple (which reminded me a bit of Star Trek TOS

).
While similar in tones, Yedahna is not in fact part of the Eder Bahreltahn story, though it was announced in the same thread.


Turtle Isle, released in March 2011, is an archipelago of 3 isles, one large and two small. Once an industrial complex, it has been slowly reconquered by Nature. THe age takes its name from a gigantic turtle shell on one of the smaller isles, which houses a concert stage with various musical instruments.
At the bottom of the tower on the link-in point there is a journal, that mentions you will need to find 7 cloths to open a gate on the other side of a terrace on the main isle, close to what looks like a D’ni clock. On the terrace there is a telescope pointed to the clock, showing a map of the locations of the cloths. The phrase in D’ni actually reads “press ESC to return to view”.

Once you have touched all the cloths, you will be able to open the gate at the back of the balcony. This area, that most casual visitors are likely to miss, is the pearl of the age, four floors, the first of which lavishly decorated with paintings, China vases and flowers. The last floor, behind barriers (which can be jumped over), has a large piston moving up and down from the ceiling. Be careful!

Next time (December 13 at 11:00 KIT) we will visit the DRA office, the starting point for Adrael. Until then!

The call stack I got in Turtle Age:

Unfortunately I couldn’t save the call stack for Eder Taygahn, but it was a short one, about 3–4 lines.
Gehn #137074, Deep Island #194197. Gahreesenomee biv keneet pishoeet b’set!
Want to know what’s going on in the Cavern? Visit the GoMe site.
MacOS wrappers, D’ni Lessons, DniTools, goodies.

Unfortunately, that call stack appears to be junked...