I take on board that this may not be possible.

However, given that if we are to have to use the World button export for Journals to export properly given the new method for writing them.

Would it be feasible to remove the File/Menu export option for exporting an age this would have stopped me thinking I was exporting correctly when I was not?

Note I learned the method using Korman 0.60 and as it was still working for me under 0.70 I had no reason to investigate the world button option or even know it existed.

There is also the Plasma Scripts .pak I will probably approach in due course for now that is way above my pay grade (currently level 0 unpaid idiot).

I did a bit of experimenting with node trees today, and have some feedback.


I also haven't totally figured out how to handle multiple animations on a single object (like how to play one animation on link in), but I didn't look very deeply into this so might have missed something.

1) I like this idea. I'm not completely sure how to represent this, however. Suggestions welcome!
2) Interesting idea, but I'm not sure how to proceed without potentially making things more complicated? Perhaps a single responder state-esque node to link the conditional to the message chain.
3) They should be loop markers.

I would like to have some additional tools for the Outliner page.

At present if you have made a search for say all of the ladders in my age (invariably loads) I may want to make all of them visible. Or invisible, at present it is a case of clicking on the first visible icon and scrolling down the page. (There may be some hot key way of doing this) I am considering something like a toggle button at the top of the column. Plus there is a limitation even on full page as it does not scroll at the bottom of the page.

I would also like to search based on the page setting.

Like display all of the objects set to a Page with a given value or show all of those with no set value with an option to change that from within the Outliner I know Sirius provided a tool for changing Page to selected in the Korman Operators tools just having this as selection in outline would make for easier checking of results.

I know I have the option of putting all of my ladders on a single layer but for organisation the Blender 2.79a limitation of 20 layers and the inability to give them meaningful names I have been trying to use the page value to do some sorting but adding that as a selection to the Outliner would be a work around.

The ability to make many more layers and name them is one of the things I plan on using in Blender 2.8 and that is if I have actually properly understood that as an option. As I have mentioned before sometimes I lack all of the requisite mental tools.

Tsar Hoikas wrote:1) I like this idea. I'm not completely sure how to represent this, however. Suggestions welcome!

The best way would be to style the node connector differently (making it bigger, for instance), but it seems Blender's API exposes only color, which is already used to identify the output node type.
Maybe displaying a small warning at the bottom of the node that tells you which input/output is not set would be an acceptable solution ?

Tsar Hoikas wrote:2) Interesting idea, but I'm not sure how to proceed without potentially making things more complicated? Perhaps a single responder state-esque node to link the conditional to the message chain.

Hmm, true. If connecting the logic modifier directly to the message isn't an option, then nevermind. Merging the responder and responder state nodes would be an option but it only saves one node instead of two, so I'm not sure it's worth the trouble.

Tsar Hoikas wrote:3) They should be loop markers.

I think you misunderstood what I was saying. In my animation, I'm adding the following marker (results in a small orange triangle on the anim track): 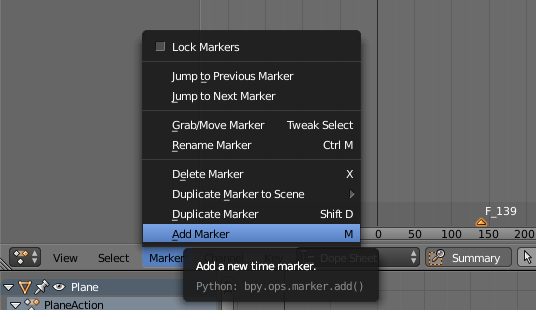 However the animation modifier doesn't accept those: 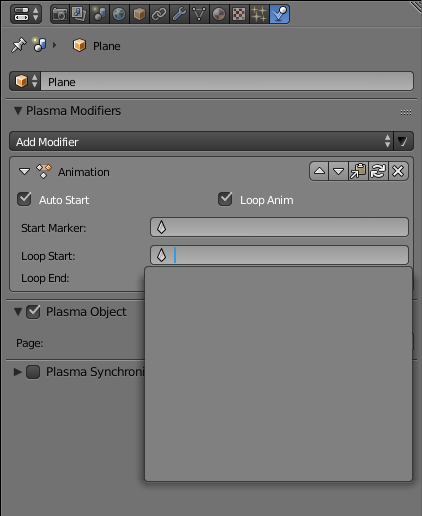 If, on the other hand, I make an armature and use the pose library to create armature poses, then the anim modifier accepts those. However they are poses, not animation markers.

Poses and animation markers seem unrelated to me, so I suppose it's a bug ?

I would like to have some additional tools for the Outliner page. [...]

That would be useful. I don't know if it's doable though. But as you guessed, at worse it's always possible to find a workaround based on automatically selecting objects matching a specific criteria (that's actually something I often do directly from Blender's interactive console, but could be added as more buttons in the interface).

(As a side note, in Unity I organize my objects by parenting them to a master object, which allows me to make "folders" within the outliner. Blender's outliner is a bit stiffer and makes this more complex though...)

A way of adding new avatar animations with Korman would be a big help, there are a few unfinished Cyan ages that had to be put on hold because no one was able to figure them out
"It is the responsibility of every student to try and surpass there teacher"
Sorry teach a Bahro ate my homework.
Hanging onto anger is like eating rat poison and expecting the rat to die!